Motorola has an event scheduled for May 13th and while we’re pretty sure that they’re going to be announcing a new phone, it looks like we have a better idea of just what they’re going to be announcing. A little while ago, we heard of the Moto X+1 and how it was going to Motorola’s evolution on last year’s Moto X, featuring upgraded internals and some new options for those looking to create their own device through the company’s Moto Maker service. Now, Moto Maker has let slip that the Moto X+1 is very much likely to be what Motorola announce in the next fortnight.

As Mobiflip has discovered, there are mentions of the Moto X+1 on the Moto Maker website, without any clear images of the device though, all we’re left with – once again – is the name. Mobiflip found this by replacing the Moto G’s codename (FLEXR1) with ‘FLEXR2’ and then found the placeholder for the new device on Motorola’s website. The screenshots aren’t anything exciting, but the fact that the name exists in Moto Maker is a pretty strong indication that Motorola is readying the service to take new orders of a new device.

So far, we’re left with very few details on just what the Moto X+1 is going to bring to the table, but we’ve been hearing things like a 5.2-inch display, a Snapdragon 800 and more, but one thing’s for sure, Moto Maker isn’t going anywhere. The headlining feature of the Moto X was the ability to customize and create your own device, choosing from a wide array of textures, colors and even different materials. Leather is said to be heading to Moto Maker for the Moto X+1 and we’re pretty excited to see what Motorola have to offer come May 13th. The question is though, if Motorola launch the X+1 with outdated specs again, will anyone take to the new device? Let us know what you think! 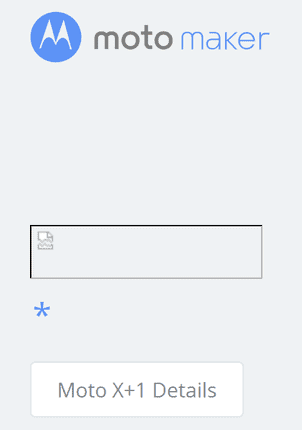