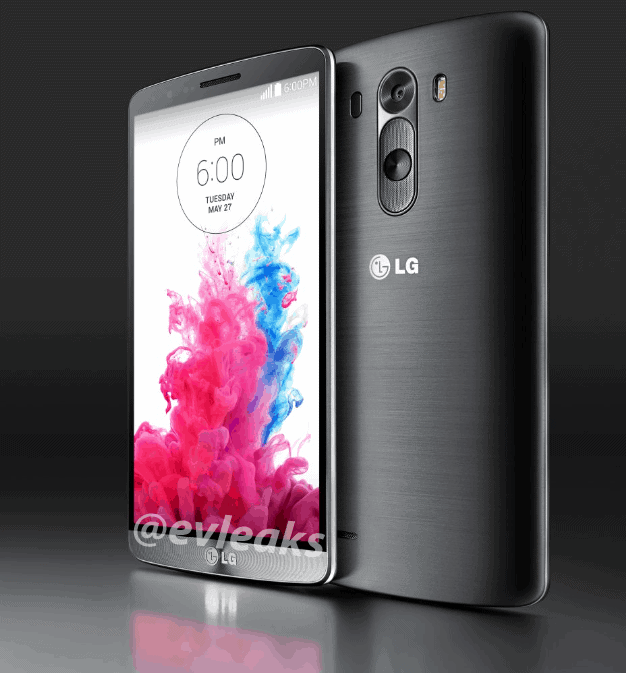 The LG G3 is leaking like crazy now. But no where near as bad as the HTC One M8 had leaked out before it's launch earlier this year. Evleaks is back with some more press shots of the LG G3, and there's not much new here, except you can actually see the screen now and see parts of the UI. It's a little difficult to tell whether the UI looks better no or not as the only thing you can really see is the status bar which still looks like the LG G2 KitKat update. But there is that circle clock widget, which appears to be for the Quick Cover case for the LG G3. Otherwise, these press shots aren't all that different from the ones we saw yesterday. But man that LG G3 looks amazing.

Another tidbit of information that Evleaks tweeted out is that the mystery sensor on the LG G3 is a laser auto focus sensor. Which is rather interesting. As most of us figured it was the IR blaster since that is where it's located on the LG G Flex and the LG G Pro 2 that were announced earlier this year and last year respectively. But according to Evleaks it's a laser auto focus sensor. Which is going to be interesting for the camera and all the software LG puts into the camera app.

We're getting closer and closer to the launch of the LG G3. We are less than two weeks away, and so far there's little surprise as to the hardware when LG announces it, but as far as software goes, there's a lot that we don't know. We know that LG has been working to refine the interface of their skin, and we also know it'll be running Android 4.4.2 KitKat. The rest is a mystery. One we'll find out on May 27th.