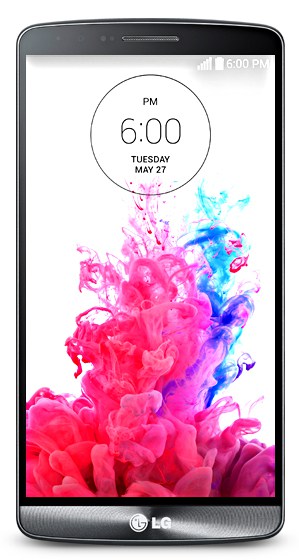 The LG G3 is slated to be announced officially on May 27th, which is next week. But as usual, the folks in South Korea get to see the device first, which is basically what's going on today with LG. They are announcing the LG G3 for South Korea today. We now have the specs – given you can read Korean – and some of the features as well. We're looking at a 5.5-inch Quad HD display, Qualcomm Snapdragon 801 processor, 3GB of RAM, 32GB of storage, 13MP camera on the back with Optical Image Stabilization+, 2.1MP front-facing camera, the dimensions are 146.3 x 74.6 x 8.9 mm, 3000mAh battery and Android 4.4 on board. The camera has an "enhanced selfie" mode, so my hopes of LG keeping the word selfie out of their features didn't happen. But the Laser Focus is true, and it is there. It's supposedly going to help you get even faster shots while in low-light.

Now it's important to remember here that this is for the Korean version, so that we might see some changes when the international and US versions get announced next week. If you remember the LG G2 had a smaller battery capacity, removable battery and microSD card slot over in Korea. While the rest of the world got a non-removable battery that was larger and no microSD card slot. But for the most part these specs are right on par with what we've been seeing in leaks lately. The design is also basically confirmed, as that doesn't normally change from the Korean version to the international version. So far this is all we know about the LG G3, but we should learn more next Tuesday when LG officially announces the LG G3 in New York City.

How many of you are excited for the LG G3? Be sure to let us know in the comments below.