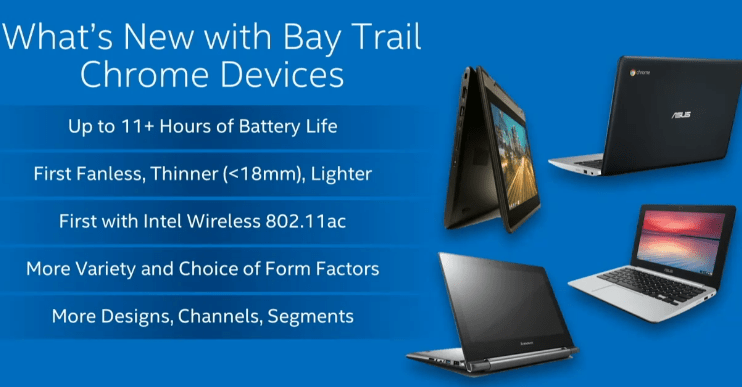 Yesterday Lenovo announced their very first entry in the Chromebook market, with two new Chromebooks(the N20 and N20P)that we'll be seeing later on this year with releases in July and August. Those aren't the only two Chromebooks that Lenovo will be launching this year though, as the Intel event this morning revealed that the China based company will also be coming out with a YOGA Chromebook aimed at the education market. Besides being ruggedized like the reference design Chromebook that Intel showed off this morning, the YOGA Chromebook will have a 360 degree rotating screen, so students can use it like a notebook or a tablet, based on their needs.

The YOGA Chromebook coming from Lenovo will be powered by an Intel Baytrail processor, and will be among a few other devices seeing that particular CPU inside. The new device from Lenovo is one of a number of devices getting aimed at education and will end up being part of Google's goal to provide a more involved Chrome for Education program for teachers and students. There aren't any specs listed for the YOGA Chromebook as of yet but we do know a few things about the Baytrail processor and its capabilities, so we can gather a few features that we might see from the upcoming education based laptop.

Since the Baytrail processor allows for a fanless design, we will probably see this new Chromebook from Lenovo come fanless. As for any other exact specs, that information has yet to be released. The Baytrail chip should also get some improved battery life out of devices and being listed as capable of 11+ hours on a charge, allowing students to get even more battery life out of the Chromebooks during the school day. Since Chromebooks are already super portable, longer battery life could mean an even easier fit into backpacks and book bags if students were able to leave their Chromebook chargers at home. The chip also supports Intel Wireless 802.11ac, and will be the first chip to support that particular standard. We look forward to hearing more about this device, but why Lenovo decided to provide this YOGA Chromebook geared towards students and teachers with a 360 degree rotating screen, and not to the two consumer oriented Chromebook models they announced earlier is a bit of an odd move though.