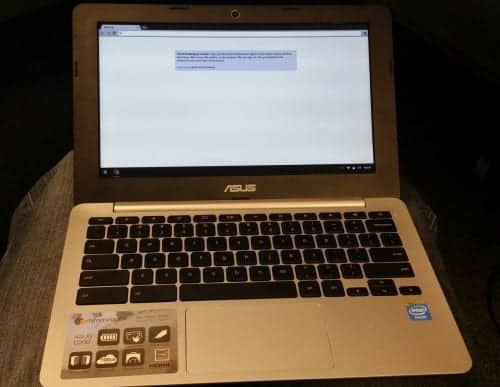 The ASUS C200 Chromebook is nearing release, so we're to believe, as the rumors are stating we should see ASUS launch the new Chromebook(also their first one ever) sometime this month. Yes, if the rumors are true we can now say "this month" as it is now the month of May. It's only May 1st though so even if we do see the ASUS C200 drop this month it could very well hit shelves and the Play Store on the very last day of the month. Nevertheless it's exciting to see some new competition come to the selection of Chromebooks that are out there currently. We have previously seen some leaked images pop up in the past showing what the Chromebook would actually look like, and today we have a few more to throw your way in case you're interested in seeing some more shots.

These are extremely high resolution and show off every angle of the new Chromebook, so we can get a good look at the C200 with all its ports and how thick/thin it actually is. It's one thing to know the dimensions, but it's an entirely different thing to actually see the device from the side and top/bottom giving you a better idea. ASUS will be launching a $340 Chromebook that comes with a 13.3-inch display equipped, which will be the ASUS C300. As for the C200, it'll of course be the smaller model coming in with an 11.6-inch display and is powered by an Intel N2830 Celeron CPU clocked at  2.16GHz. Intel also covers the graphics portion of the chip, using its own HD graphics GPU. The C200 will also come with 16GB of onboard storage, but just in case that's not enough you'll have 100GB of Google Drive cloud storage available at your disposal. The C200 when released is said to cost consumers $260, which isn't bad at all especially when you consider the competition for that same price range. From the images you can see that the C200 has 2 USB ports, one HDMI out, audio port, SD card slot, and your power adapter port to charge the battery up when needed. Judging by these images alone the ASUS C200 looks like a nice little option if you're looking for something smaller and lighter. Not just lighter on weight, but lighter on the wallet as well.