For a little while now, we’ve been hearing that Samsung is to release an Active version of the Galaxy S5, just like they did with last year’s Galaxy S4. For those unfamiliar with last year’s Active Galaxy, it was essentially a Galaxy 4 wrapped in a different casing that was more rugged and gave the device its waterproof and dustproof capabilities that made it “Active”. This year however, the Galaxy S5 itself is waterproof and dustproof, so just what is Samsung going to do to freshen up the formula? Well, according to recent benchmark findings, absolutely nothing on the inside.

A recent benchmark for a Samsung device with the model number SM-G879A has been spotted, and it posts the same sort of results as the Galaxy S5. The Snapdragon 801, 2GB of RAM, 16-megapixel camera and 1080p display are all the same here which, after last year’s Galaxy S4 Active, is to be expected somewhat and we can’t say that we’re surprised to see the same specs being used. What the benchmark doesn’t tell us however, is how large the display is (but we’re assuming 5.1-inches) or whether or not the panel type is to be AMOLED or a normal LCD as it was in the Galaxy S4 Active.

Just earlier today, it was hinted that the Galaxy S5 Active could be headed to Sprint, which would make a change from the AT&T exclusive Galaxy S4 Active. With the Galaxy S5 already sporting the biggest feature last year’s Active had going for it, we’re hoping that Samsung will have something on offer to spice up the formula a little bit, after all it’s going to need more than a slightly harder wearing case to stand out this year as the Galaxy S5 already has some fairly advanced features under the hood. With rumors and leaks of the device heating up, it doesn’t seem like we’re going to have much longer to wait when it comes to seeing this hit shelves. 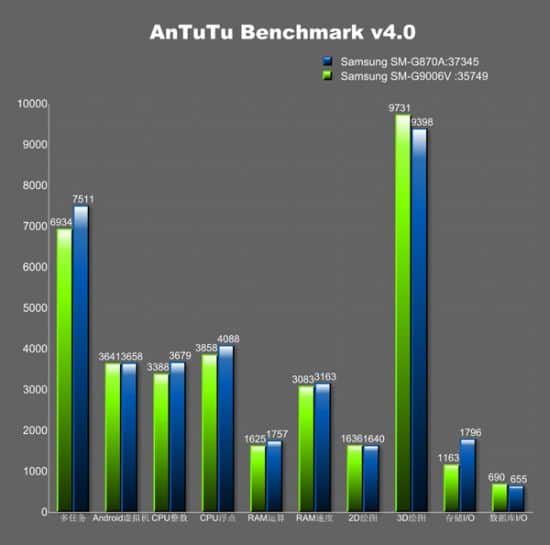