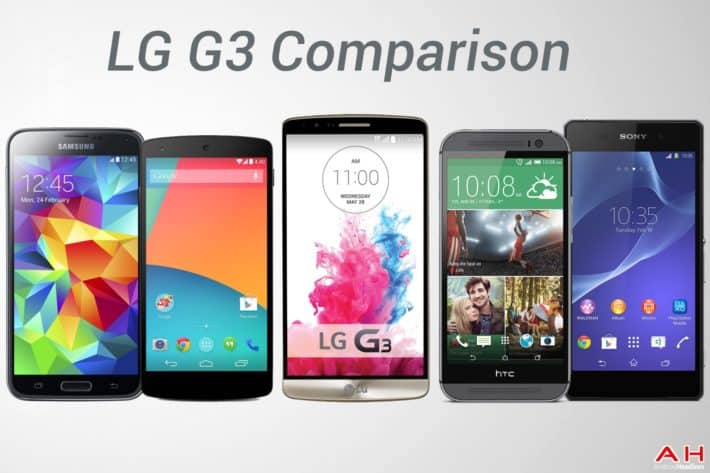 Now that the LG G3 is now officially announced, with its QHD display and all, let's take a look at how it shapes up against four other flagship devices from big name manufacturers in the Android arena. We're going to take a look at how the G3 compares against the Galaxy S5, the HTC One (M8) the Nexus 5 and Sony's Xperia Z2. Of course, these aren't the only other smartphones out there and this isn't an in-depth comparison, rather this is more of a quick look comparing the creme de la creme we've seen launch so far this year. Let's take a look at the devices on paper  and then weigh up the key features from each of these devices.

Astute readers will have noticed that the G3, despite having a 5.5-inch display, the biggest on offer here, is the same height as the HTC One (M8) and Xperia Z2 and only a few millimeter wider than all of these devices on offer here. This leaves the Galaxy S5 and the Nexus 5 as the smallest two devices. Speaking of which, the Nexus 5 is beginning to look pretty basic when compared to the likes of Samsung and LG, but it is flying the flag for Google. With no storage expansion, a much lower-resolution camera and a slightly outdated processor the few things the Nexus 5 has going for it is its diminutive size and speedy updates.  The below table not only gives us some of the key figures to look at, but also quickly shows us just how much choice there is out there right now. 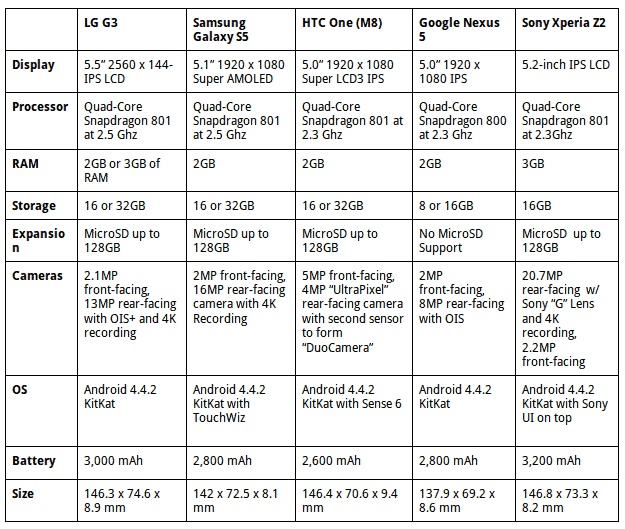 All five of these devices share similar DNA under the hood and should display comparable performance, but they've each got something different going for them. The Nexus 5 keeps things simple, which in turn keeps the price down, while Sony and HTC are offering compelling experiences for mobile photographers – the One being best for #selfies – and Samsung's Galaxy S5 is full of tricks like the fingerprint sensor and heart rate monitor. Meanwhile, today's latest contender, the G3, has cool features like a new metallic build and a new approach to sound in a smartphone. The G3 has a 1 Watt speaker, which doesn't sound like much but should deliver sound second only to the One (M8) on this list and it has a built-in headphone amp as well for hungry listeners on the go and like the Sony Xperia Z2 it joins the Galaxy S5 in shooting video in 4K.

This is just a quick look at the G3 compared to other flagship devices, but these aren't the only devices to think of, there's the Galaxy Note 3 and more subdued ones like the Moto X to think about as well. To find out more about the G3, just take a look at the front page of the site and we'll have more info for you. We've reviewed most of these devices and you can take a look at our lengthy, in-depth reviews here – with an Xperia Z2 review coming soon and a G3 review as soon as we can, too.