Those familiar with Ultrabooks and Microsoft’s relentless pursuit of success with Windows 8 will be familiar with Dell’s XPS range. If not, the XPS line of laptops from Dell are some of the best that Dell has to offer, like the Dell XPS 13 which is one of the best Ultrabooks on the market. Meanwhile, the XPS 12 is a tablet/laptop hybrid which features a swivel type display to turn your 12.6-inch Ultrabook into a Windows 8 tablet. It’s a cool design, but obviously doesn’t make for the best tablet out there. Now, it looks like Dell might be working on a Dell XPS 12 that features Android onboard as well as Windows 8.

As The Droid Guy has noticed, a Dell XPS 12 running Android was recently found in GFXBench, which of course leads us to ask if Dell is preparing a Windows/Android hybrid of their own. The device in question features a Full HD 12.6-inch display running Android 4.4.2 KitKat, powered by an Intel Core i3 with 4GB of RAM and what sounds like an 80GB SSD (with 67GB space listed in the benchmark). The model number is XPS12-9Q33, which is actually the same number used for a Windows 8 variant on sale, which could be a sign of something fishy.

This all sounds great, but I very much doubt this ever makes it to market. It’s been reported that ASUS’ Transformer Book Duet which ran Windows and Android side-by-side was put down by Google and while that’ not been confirmed, it’s been months since we heard anything else from ASUS on that score. The same can be said of Samsung’s ambitious Ativ Q with a stunning display that ran Android and Windows just the same, Samsung announced the product last year and we’ve never seen it again. So, it seems unlikely that this Dell XPS 12 running Android is anything more than a prototype or something that Dell is messing around with. We’d be very surprised if this ever gets to market. After all, Dell, Samsung and soon ASUS all have Chromebooks to sell as well. 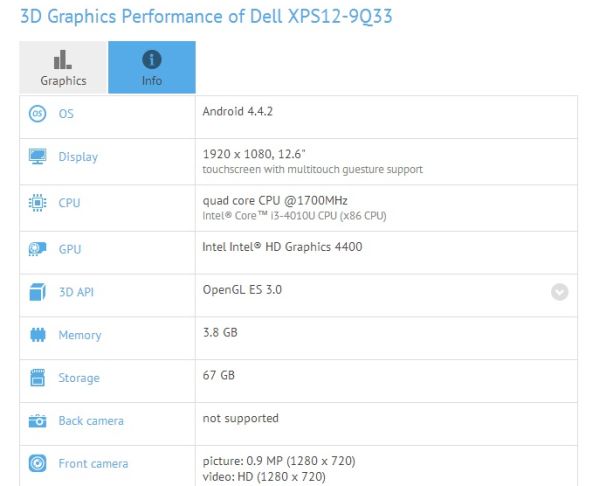