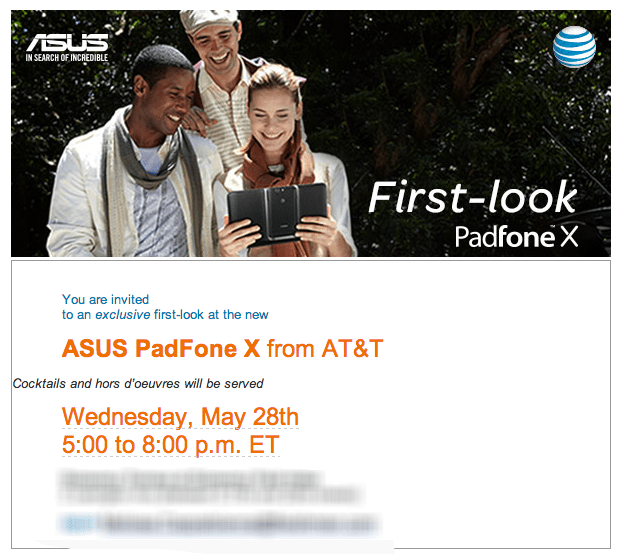 Are we finally going to get a release date for the ASUS Padfone X? Back at CES in January, ASUS and AT&T announced that AT&T would be the exclusive carrier to carry the Padfone X. Which is a tablet and smartphone rolled into one. We never thought it'd make it into the US because carriers are pretty greedy and would rather you buy data for a tablet and smartphone instead of sharing between the two. Nonetheless, AT&T will have the Padfone X, but when? Well today, invites began going out for an event for both ASUS and AT&T. Which they are calling the "Padfone X from AT&T". It's set for May 28th, which is the day after LG has their big announcement. So that next week is going to be a pretty big week around here. Between the LG G3 and the ASUS Padfone X. Hopefully AT&T and ASUS do tell us some new stuff about the device instead of the same old news we knew already. We're crossing our fingers for a release date as well.

The event is at 5PM EST on May 28th, so we may have a big keynote, or it may be like the LG Optimus G Pro event LG and AT&T held last year that was just a hands-on. So we'll be watching for that next week. We're hoping the device is available soon, as I know plenty of people who would love to pick up the ASUS Padfone X, but it's getting close to being outdated, unless they've upgraded the internals already. How many of our readers are excited for the ASUS Padfone X on AT&T to finally launch so you can grab one? Let us know in the comments below.