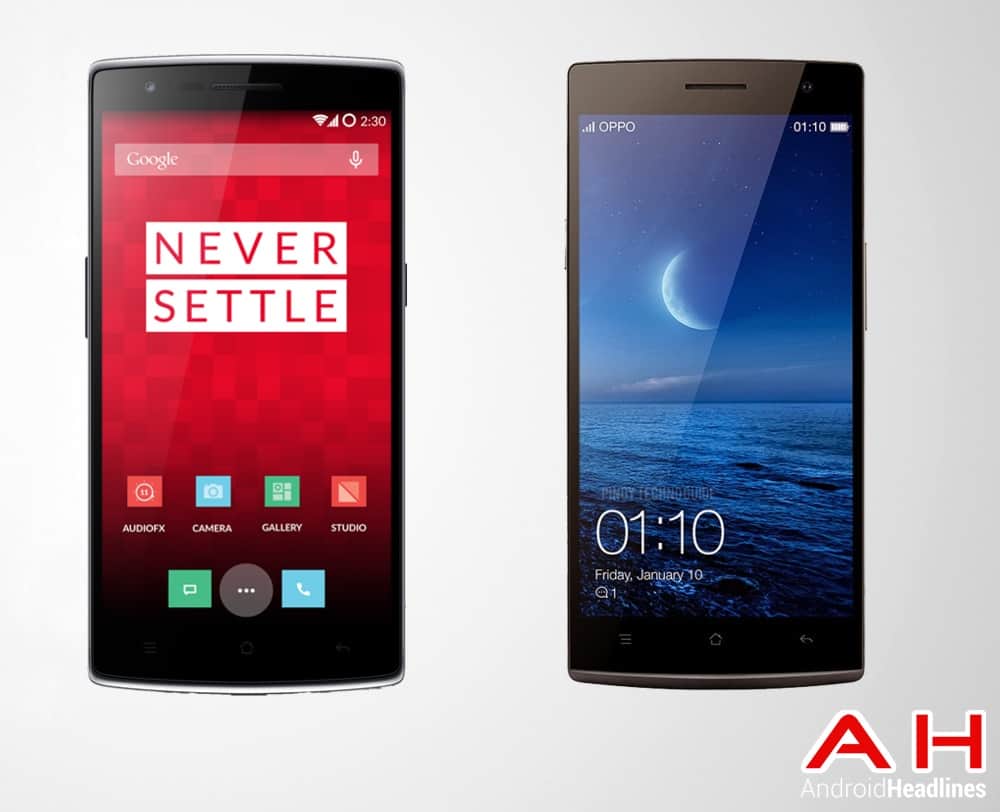 This is indeed a strange comparison – OnePlus One versus Oppo Find 7a – as these two devices are like looking in the mirror to one another.  Does Oppo fully own OnePlus, partially own or have any influence over Pete Lau – a former Oppo executive that left to startup OnePlus, or should it really matter?  Oppo caused quite a stir with its Oppo Find 7 release, that is still not available – now they launch a slightly watered down version, the Find 7a, which is already available to internationally pre-order for $499.  If you do pre-order, Oppo will throw in an Easy Cover case, an additional 2800mAh battery (which is an odd thing to do – is this the type of battery life we may expect?), and a 32GB microSD card – which does help sweeten the deal and take some of the sting out of the $499 price tag.

These devices stack up very well to one another – both have the exact same display and both use a Snapdragon quad-core processor, although the one used on the OnePlus is the true 801 clocked at 2.5GHz versus the juiced up 800 clocked at 2.3GHz found in the Find 7a.  It appears the even the cameras are the same on both devices at 13MP for the main camera and 5MP front-facing camera (FFC).  Both devices have stereo speakers, the One has bottom facing speakers and the Find 7a has backfacing speakers that are "crazy loud."  The size is hauntingly almost identical as is the weight.  The batteries are fairly close with the edge going to the OnePlus with 3100mAh versus 2800mAh.  Please take a look over the specifications below and then we will discuss the differences of both devices and finally try to pick a winner of the comparison. 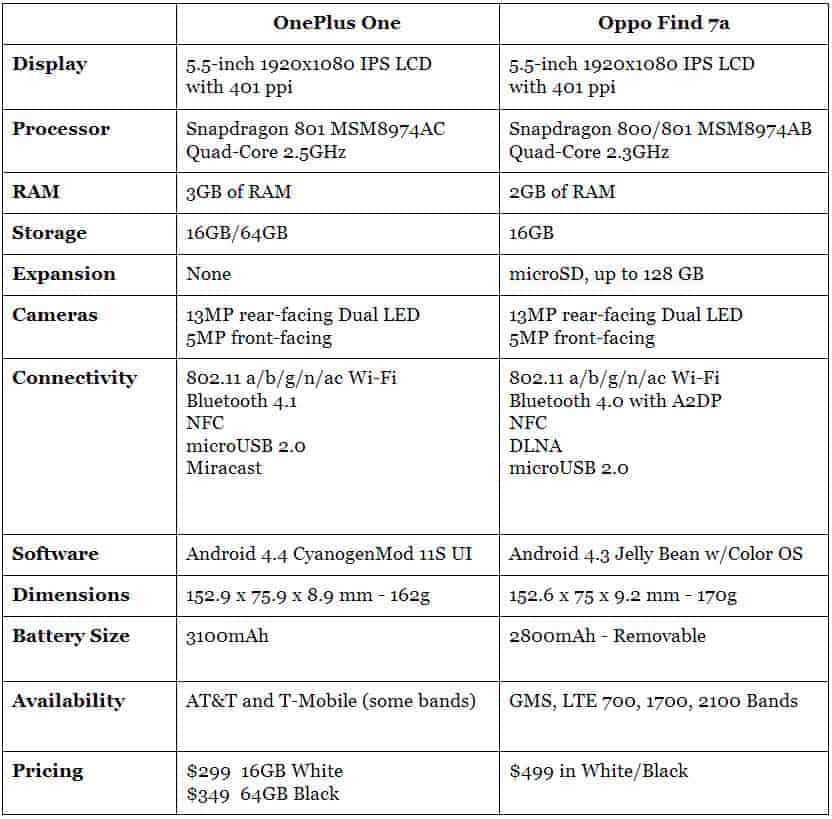 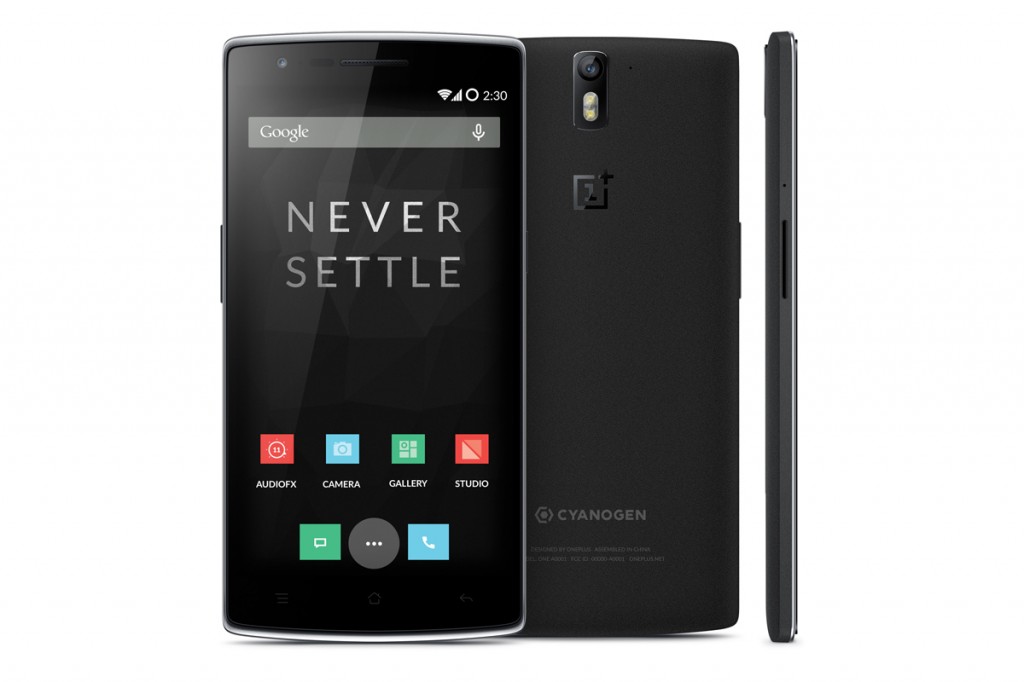 The OnePlus One was announced to great enthusiasm, but now has been delayed until late June.  It does hold a slight advantage in the processor department, and comes with 3GB of RAM rather than the Oppo Find 7a's 2GB.  Both devices offer a 16GB internal storage model – the One also offers a straight 64GB model and the Find 7a offers a microSD card for up to an additional 128GB of storage.  The One also has a larger battery at 3100mAh, but not much larger than the 2800mAh found in the Find 7a.  The One does use Android 4.4 KitKat, however, the One uses a version of CyanogenMod called CyanogenMod 11S.  The price is what really sets this apart from the Oppo Find 7a – at only $299 for a 16GB model ($200 cheaper than the Find 7a) and $349 for a 64GB model, you would be hard pressed to find more specs for your buck.  The One even out-prices the Google Nexus series smartphone. 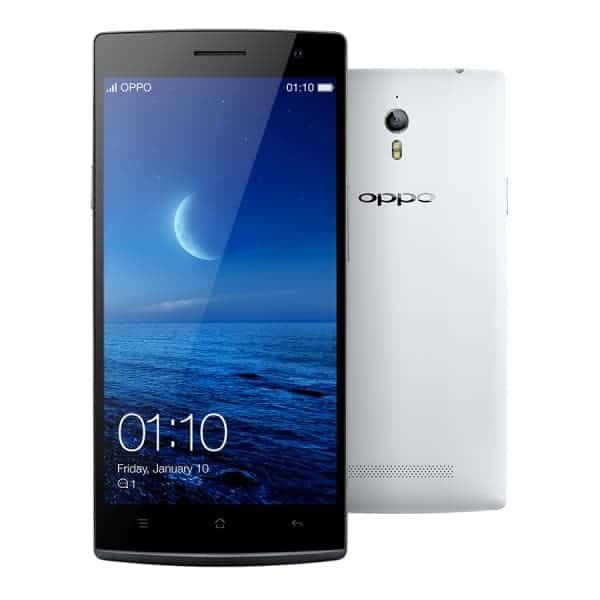 Oppo has promised to make some big waves in the smartphone world, but so far we have not seen much more than a trickle of excitement.  With the Oppo N1 we were excited about its build and rotating camera, but with no LTE support and only the GSM network it has barely made a splash in the smartphone market.  Now they are launching a Find 7 and Find 7a, slightly watered down version of the Find 7.  It has only 2GB compare to the 3GB of the OnePlus One, but it does offer a microSD slot for increasing its meager 16GB of internal storage with more space via microSD up to a 128GB card.  The battery is slightly smaller at 2800mAh, but it is removable – if you pre-order now Oppo will even give you a second battery.  The Find 7a is also using only Android 4.3 Jelly Bean with their own skin they call Color OS. 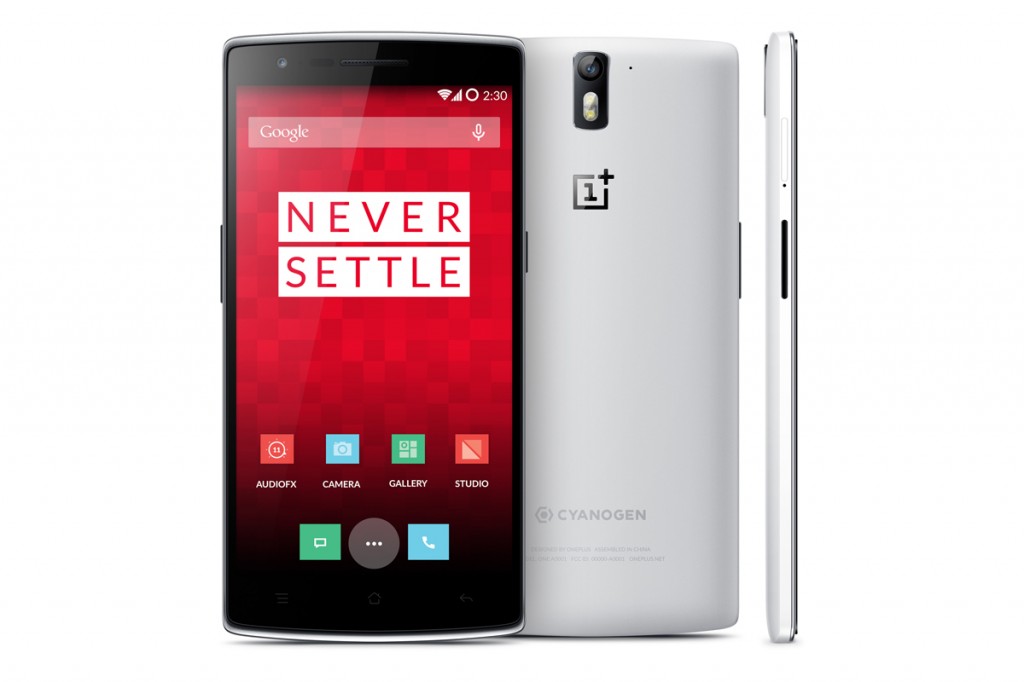 Based on a few specs and the price, we have to go with the OnePlus One in this comparison.  Looks is not a deciding factor as they are almost identical in that department.  Availability is a common problem with both devices, but the One has the better processor, albeit only slightly and a larger battery.  The One uses CyanogenMod 11S that looks kind of like vanilla Android, but gives you more access to the system without having to root your device – it is also based on 4.4 KitKat, whereas the Find 7a is still based on Android 4.3 Jelly Bean.  It also has Touch on Lens (TOL) screen technology, which means that OnePlus has done its best to 'remove' the space between the display panel and the touch layer…the same thing that Samsung is touting with their newest Super AMOLED displays.  The Find 7a does have access to a memory card, but for 64GB at $349, that is quite a bargain and too good to pass up.

Please jump over to our Google+ Page and let us know what you think of this comparison – which device, if any, would you like to try your hand at…as always, we love to know what your think.