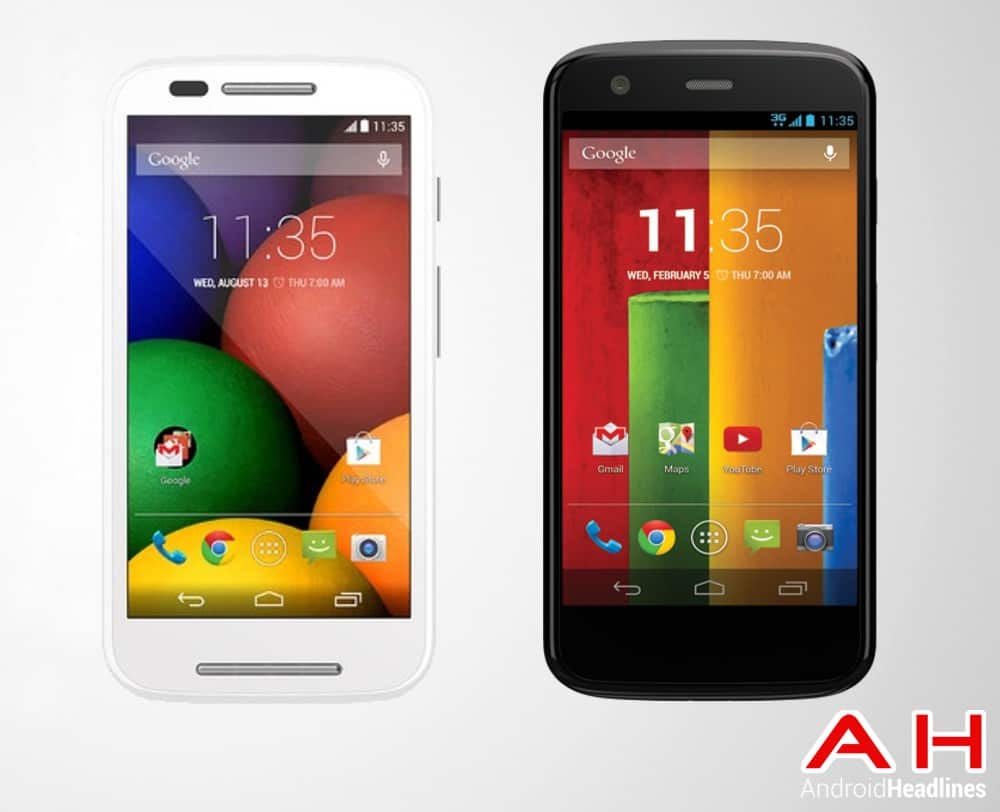 Here is a comparison that really makes sense, so I do not want any of this, "why did you compare those two phones – they are so different." Motorola has given us the unique opportunity to look at their latest entry-level smartphones side-by-side and see exactly where they are similar and where they differ.  How does the newest member of the Moto family, the Motorola Moto E, stack up to its six month older sibling, the Moto G.  The Moto G has turned out to be Motorola's biggest seller of all-time and is still a very popular device in many parts of the world – in fact a 4G LTE version is being released in Canada in a couple of weeks. Motorola claims that they 'fixed' a few items on the Moto E that they were not happy with on the Moto G, but never said exactly what those fixes involved, other than that they moved the speaker to the front of the Moto E and added a microSD slot.

Both devices are very similar in both design and size – displays are almost the exact same size, they both have just 1GB of RAM, each has a 5MP main camera, both are water-resistant with a nano coating, both have the latest Android 4.4 KitKat, and the batteries are extremely close in size. Please look over the more detailed specifications below and then we will look at each individual device to see exactly how they differ from each other and then we will choose either the six-month old Moto G or the brand new Moto E as the winner of this comparison. 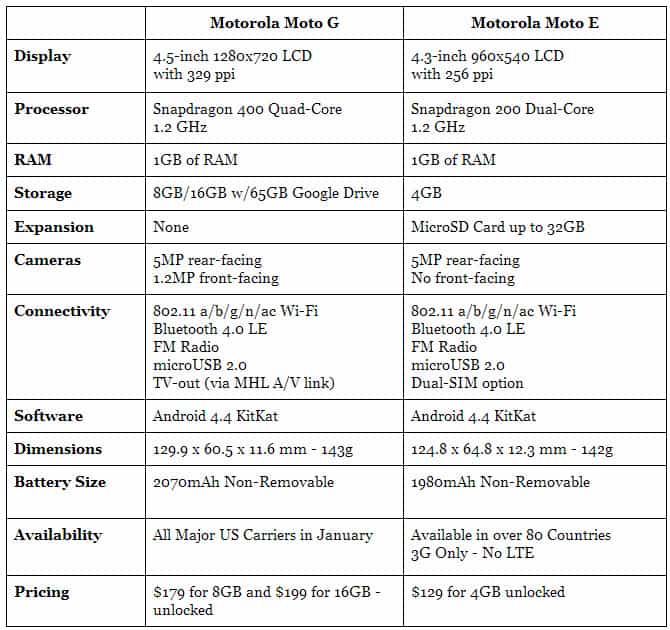 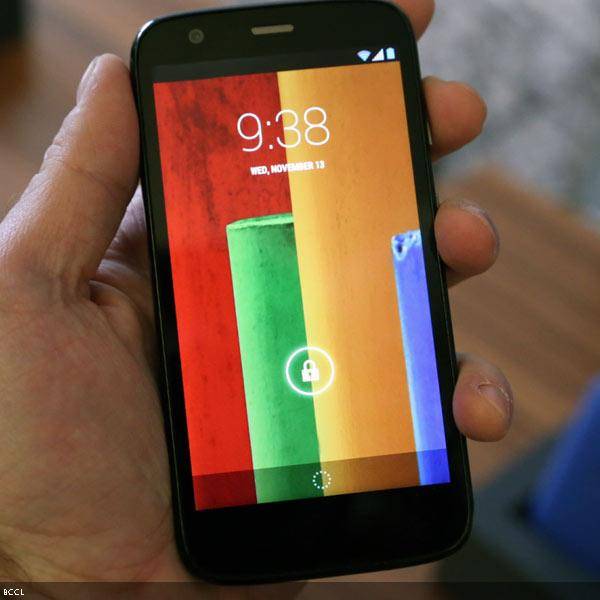 The Moto G was a beloved device when it was introduced – other than not having 4G, it was a solid entry-level smartphone, and Motorola's bestselling device of all time.  It has the long proven HD 720p display that is much better than the qHD on the Moto E.  The storage options are 8GB/16GB for the 3G models and no expansion, however, on the new 4G model with 8GB, they do offer a microSD card slot to increase the storage.  The processor on the Moto G is much better – a Snapdragon 400 quad-core clocked at 1.2GHz.  The main camera is 5MP with an LED Flash and a 1.3MP front-facing camera for video chatting and selfies.  The battery is just slightly larger at 2070mAh vs 1980mAh for the Moto E – there should really be no difference in battery life. 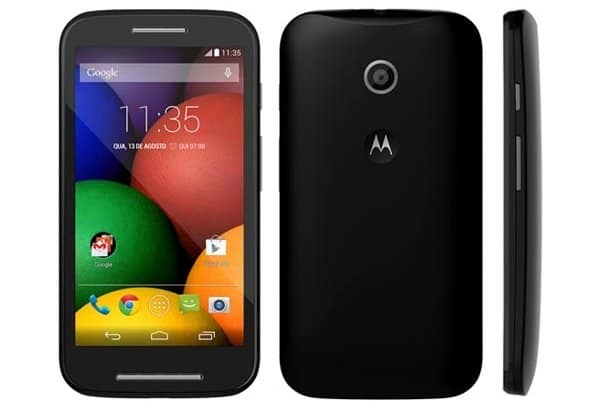 The Moto E is truly a 'baby brother' to the Moto G, in almost every respect – a cheaper version in almost every way and is the first entry-level phone to have Android 4.4 KitKat. The 4.3-inch display is a tad smaller than the 4.5-inch of the Moto G, which does not mean much, however, Motorola downgraded the scene from HD to qHD to only 960 x 540 resolution, the processor is the newest version of the Snapdragon 200 dual-core processor clocked at 1.2GHz.  It only sports 4GB of memory, but does offer a microSD card for up to an additional 32GB of internal memory, something the Moto G does not possess.  The Moto E has the same 5MP main camera for adequate photos, but Motorola chose not to include a front-facing camera or a Flash – no video chatting, selfies or nighttime shots with the Moto E.  The Moto E does have dual-SIM capabilities for those countries, such as Brazil, where customers jump networks depending on the rates.  Because of the countries that the Moto E is being sold, it only comes in 3G, but the device only costs $129 and you do get what you pay for – but the Moto E is not a 'cheap' device. 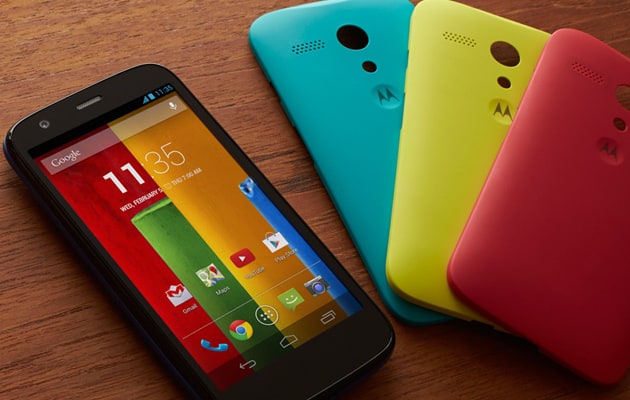 This is really a fairly easy one after reviewing the specs and features on both of these devices. Considering where most of these smartphones are being sold, both are a great bargain.  The Moto G is about as low in specs that most people would put up with – the Moto E just strips away a little too much for our liking. However, where most of these devices are being sold they are truly a Godsend from Motorola to those buyers that up until now had to buy used phones or take two or three-year old hand-me-downs.  The Moto G is definitely worth the extra $50, but if money is really tight, you could do a lot worse than the Moto E.  The better display, faster processor, more base memory, better camera situation with LED Flash and front-facing camera – it will just perform better under stress. For all of the above reasons we have to pick the Moto G as the winner of this comparison.

Please let us know on our Google+ Page what you think about the Moto G or Moto E and if you wish they were all 4G LTE so you could buy one where you live or are the specs way too low for you…as always, we would love to hear from you.