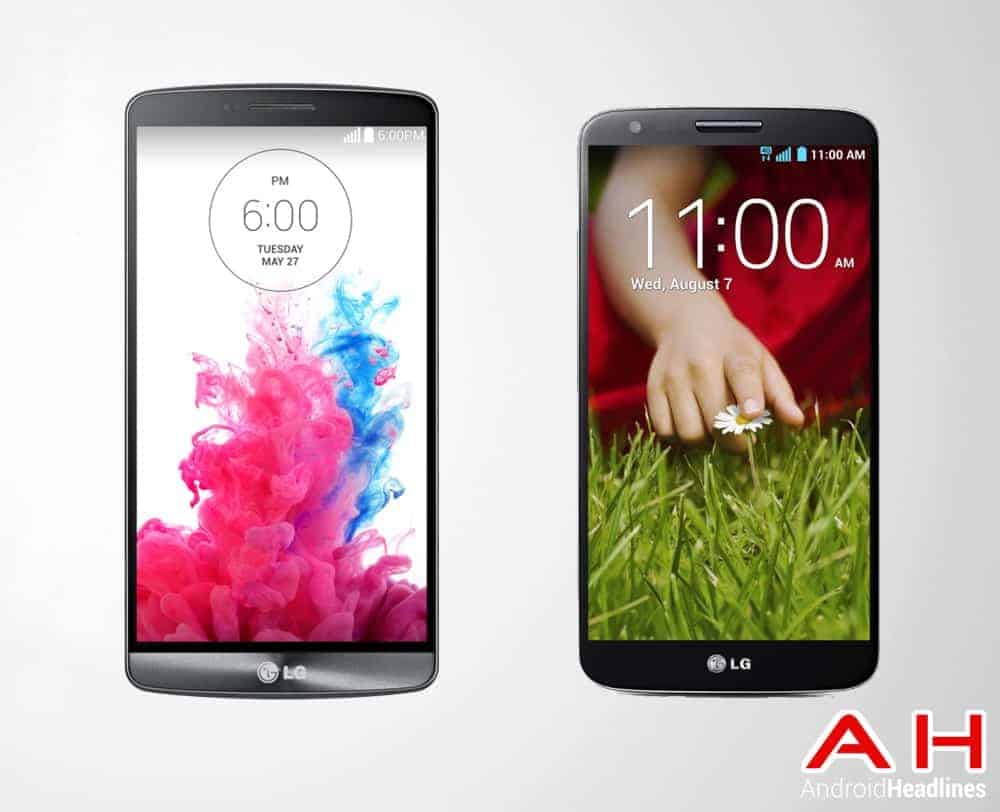 LG has finally made an official announcement concerning the LG G3 so naturally it is time to do a new school, old school comparison – the LG G3 versus the LG G2. Now of course, I can already hear you LG lovers babbling about how this is a stupid comparison, however, it is not stupid for three reasons – first, we ALWAYS compare the new and old version of any device to see exactly what is different…secondly, with the price of the G2 at $0 on many of the carriers, is it really worth paying $200 for the newest model…and lastly, if you have the G2, is it worth upgrading to the G3 or should you pass until the LG G4 next year.  See, it is not so stupid after all!

Like all new devices released so far this year, the LG G3 is not that much different from its predecessor – if you take away the display and processor and dual-LED flash, they are almost identical spec wise. They both offer a 2GB of RAM with 16GB internal storage model, although if you opt for the 32GB LG G3 model they throw in an additional 1GB of RAM. They both use a 16MP main camera and 2.1MP front-facing camera, although the G3 does give you a dual-LED flash versus the single LED Flash on the G2 and adds laser focus. Even the 3000mAh battery size is identical – and LG has done an amazing job with squeezing out battery life on the LG G2, so we would expect that same from the LG G3…however, that QHD display could help use the battery up at a faster clip, although LG claims that it will not.

Please take a look at the specifications below and compare the LG G3 with the LG G2 and then we will point out some of the differences – both good and bad – and then try and make a competent decision on which device will win this comparison. 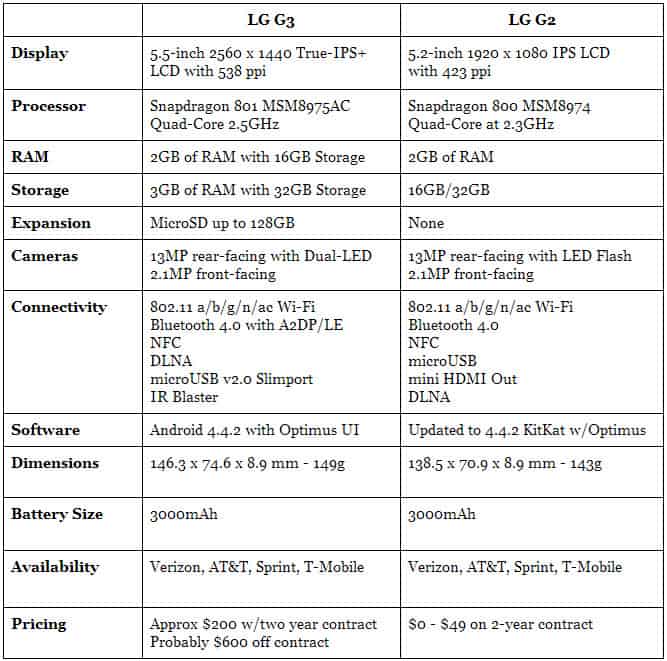 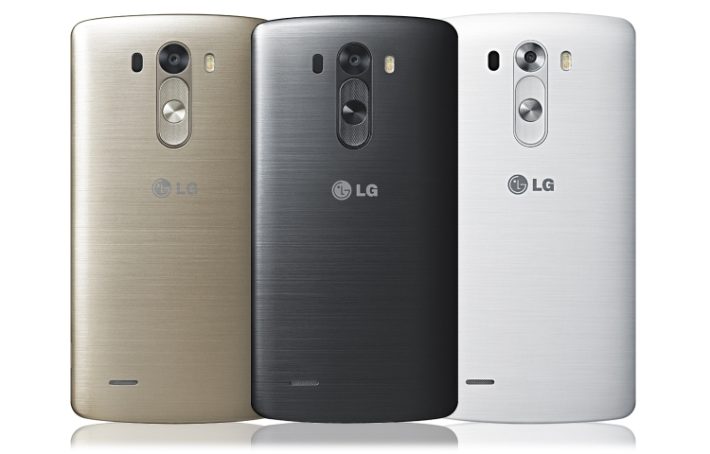 Okay, I know this is supposed to be all (mostly) about specifications, but we would be remiss if we did not point out that the LG G3 looks a lot better than the LG G2 – that "metallic skin" looks amazing – okay, it is still a plastic backing, but with a "metallic" look…whatever, it is beautiful and hopefully will not scratch.  Now back to the specs – the G3 definitely wins in the display category with a quad HD display of 2560 x 1440 pixels giving you 538 pixels-per-inch (Yikes!) and blowing away the G2.  The processor is slightly better, but nothing to get real excited about – the Snapdragon 801 quad-core clocked at 2.5GHz – it's the same one in the Samsung Galaxy S5.  If you get the 32GB storage model you can also get 3GB of RAM over the standard 2GB found in the G2.  It also sports a microSD card slot for adding up to 128GB of internal storage.  Except for adding a dual-LED flash and the laser auto focus, the cameras have stayed the same from the LG G2. They did improve on sound by adding a 1-watt rear speaker, which is nicer than the LG G2's single speaker, but certainly, HTC's dual stereo front mounted speakers on the HTC One M8 have nothing to worry about. No formal pricing has been announced, but we expect it to be approximately $200 on a two-year contract and $500 – $600 off contract. 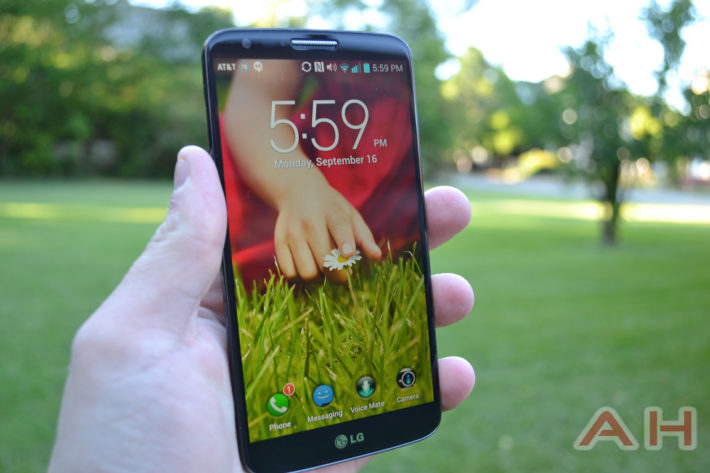 The LG G2 is truly a great device and many techies I know (and sometimes admire) really love this phone, but it is a year old, so can it really stand up against its replacement?  The LG G2 is the first device that put the on/off and volume controls on the back of the device – a little unnatural for sure – but users say that they quickly adjusted to them and LG was confident enough to put them in the exact same place on the new LG G3.  The display is where the LG G2 suffers in comparison to the LG G3 – it has a slightly smaller 5.2-inch vs 5.5-inch – no big difference – but the bumped up the display from a Full HD 1080 pixels with 423 pixels-per-inch (ppi) to a quad HD at 1440 pixels and 538 ppi.  The processing power suffers a little, but not by much – the LG G2 has the Snapdragon 800 clocked at 2.3GHz versus the newer Snapdragon 801 clocked at 2.5GHz.  There is also no microSD card slot for the LG G2.  The camera is 13MP and it took great pictures in our review, and LG decided not play the megapixel game and kept it the same on the LG G3, but has improved its functionality. The pricing is fantastic right now – generally you can pick one up for FREE on a two-year contract.

Okay, let me start with this thought – if you do not 'need' the quad HD display – if you own a G2, then keep it until the LG G4 comes out next year with a really upgraded processor and 64-bits, or if money is tight, buy the G2…it is a really good smartphone. But, this comparison is really about specifications, and when you compare the displays, there really is no comparison. They say the human eye cannot discern any differences above 300 ppi, but I say poppycock (yeah I said it), there is just something about the added pixels that breathes extra 'life' into photos and makes reading that much easier. That being said, the processor, although not a big jump, is better, as is the dual-LED flash and laser focus, the addition of the microSD card slot, the ability to get 3GB of RAM, and while not a specification…it just looks damn (hey, I already said, poppycock) nicer than the LG G2. For those reasons I chose the LG G3 as the winner in this comparison.

Please jump on or Google+ Page and let us know what you think about the new LG3 – is it enough of an upgrade…as always, we would love to hear from you.