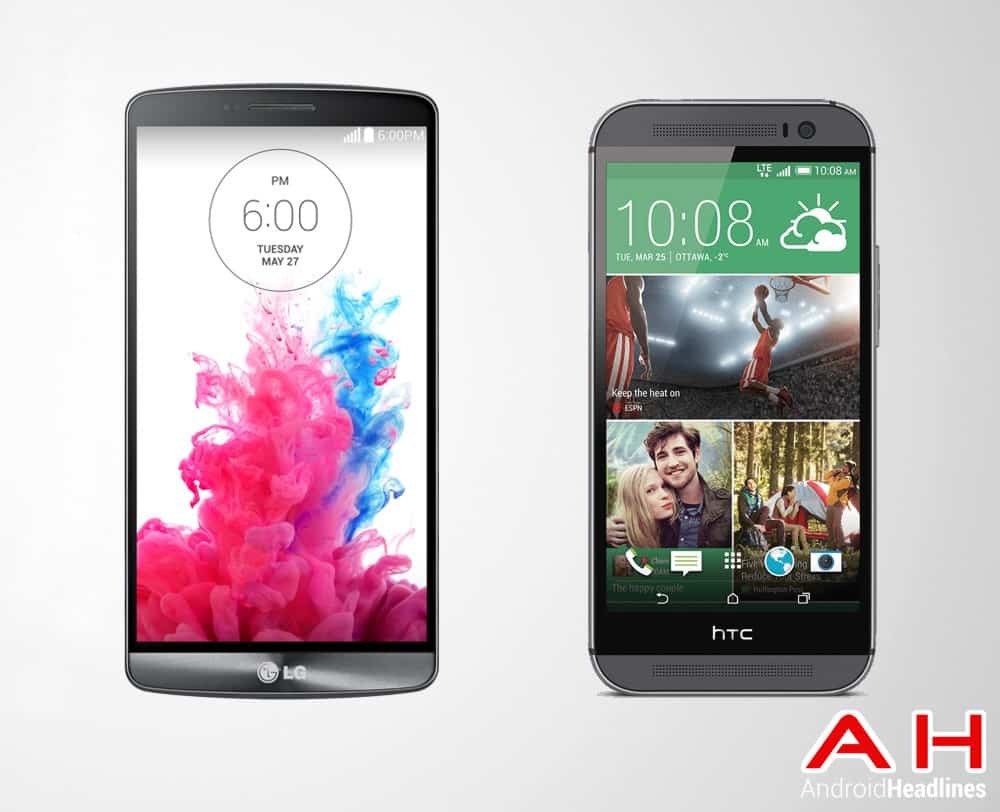 Okay, we just finished up the comparison of the LG G3 and Samsung Galaxy S5 and now it is time to match up the LG G3 with HTC's new flagship, the HTC One M8.  While the LG G3 has a faux metallic backing, the HTC One M8 has a "full metal jacket," although both devices look awesome. These two flagships have a few things in common – the size of the screens are close, the processors are also close, they each have 2GB of RAM on the 16GB models, and they both have a microSD slot for up to an additional 128GB of storage.  They both sport Bluetooth 4.0, NFC and use the microUSB v2.0.  The size of the devices is identical in length, and they are pretty darn close in width and thickness.  Both devices will be on all major networks in the U.S. sometime this summer and pricing is about the same on a two-year contract.

Please take a look at the specifications below and check out the two devices and see how they compare to one another. We will then look at each individual device and see how they differ, both good and bad, and from there we can pick a winner of this comparison. 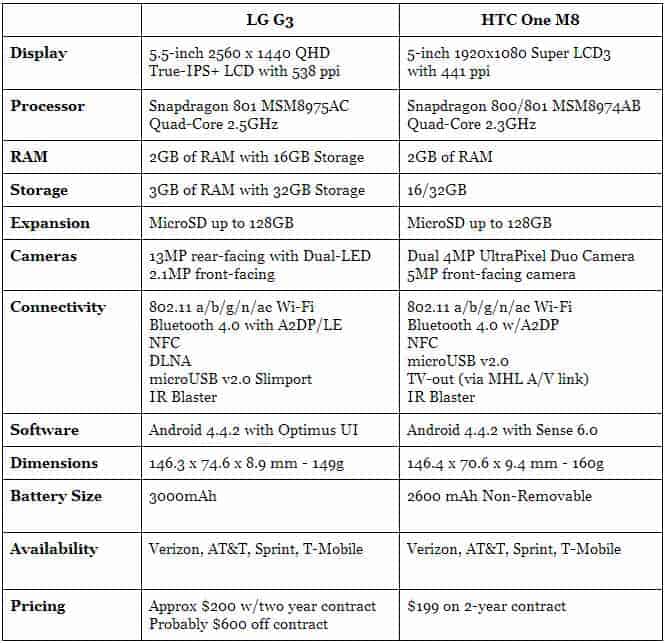 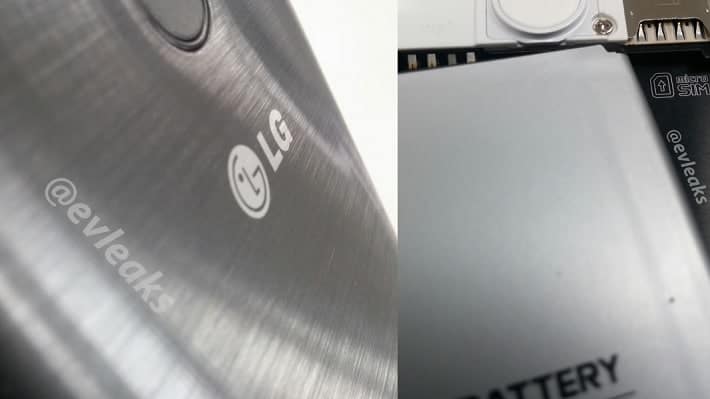 This is the newest rendition of the LG G series – the LG G3 – and like all of the other flagships offered this Spring, it is more evolutionary than revolutionary…but of all the devices so far, the G3 has made a real effort to change and improve on its predecessor, the G2. We will start with the design – basically the same, but they really cleaned up the lines, added a nice curved back and added a 'metallic' substance to the plastic shell that looks awesome. The display is another area we are definitely talking about – the newest, sharpest 5.5-inch QHD 2560 x 1440 display with a whopping 538 Pixels-per-Inch (PPI) and they squeezed it into the smallest bezel they possibly could. The 32GB model carries 3GB of RAM as well – not really understanding the correlation between 2GB/16GB and 3GB/32GB – why not just use 3GB in both. LG really took some steps in their camera as well, although at first glance you will notice that it is the same 13MP as last years'. This is true, but they added a Dual-LED flash to get better tones in the photos, ala iPhone 5s. They also incorporated a new laser auto focus for faster and more precise focusing as well as added OIS+ for increased stability in taking photos. The 3000mAh battery should handle the new G3 in fine fashion as LG can seem to squeeze as much out of their batteries as anybody. LG even improved the speaker by adding a new, full 1-watt rear mounted speaker…while not near as nice the dual, front mounted speakers on the One M8, it should hold its own in loudness and clarity. The LG G3 will be on all four major U.S. carriers in June or July for approximately $200 on a two-year contract and $600 – $650 off contract. 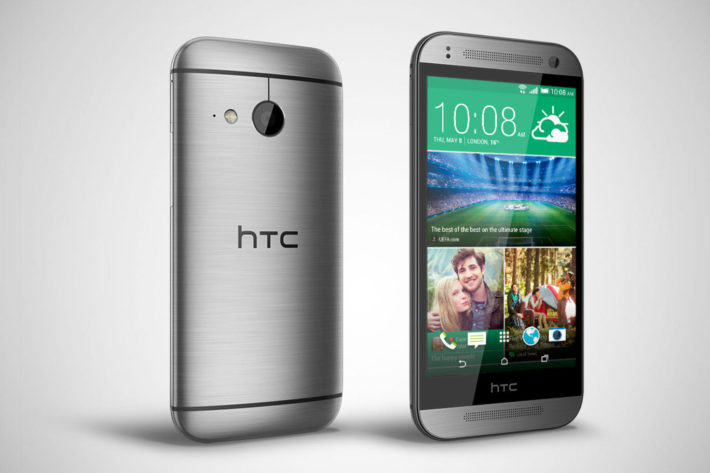 Sleek, rounded, and beautiful have all been use to describe the HTC One series of devices and the HTC One M8 is no exception to the rule…it is arguably the best looking device on the market today. It also has, undeniably, the best sound of any smartphone with its dual, front-mounted stereo speakers. It has a 5-inch Full HD display with a resolution of 1920 x 1080 with an incredible 441 PPI – but it now pales in comparison to the 5.5-inch QHD display and 538 PPI found on the new LG G3. We said that the processors were very similar, and they are, however, the One M8 still uses an overclocked Snapdragon 800, not the true 801 (see the model numbers on the spec sheet), so the nod would have to go to the LG G3. The HTC One M8, like its predecessor, uses a 4MP UltraPixel technology for its main camera and it will produce a good quality photo…for the M8, HTC added a second camera and are calling it the Duo Camera. It is not used for actual picture taking, but to add depth or a 3D like quality to pictures when it is used…it does not make the actual photo sharper or add pixels, just certain effects. One thing of interest that HTC did was provide a 5MP FFC which will do a great Video Chat and selfie. The battery life has also been good on the One M8 and with only a 2600mAh battery. It is smaller than the 3000mAh found in the LG G3, and while battery size is not always a direct correlation to battery life, we know for a fact that LG devices handle their battery usage very well. The HTC One M8 is running the latest Android 4.4 KitKat with the newest Sense 6.0, which is also liked by most users. The One M8 is available now on all major U.S. networks for approximately $200 on a two-year contract.

…and  the Winner is… 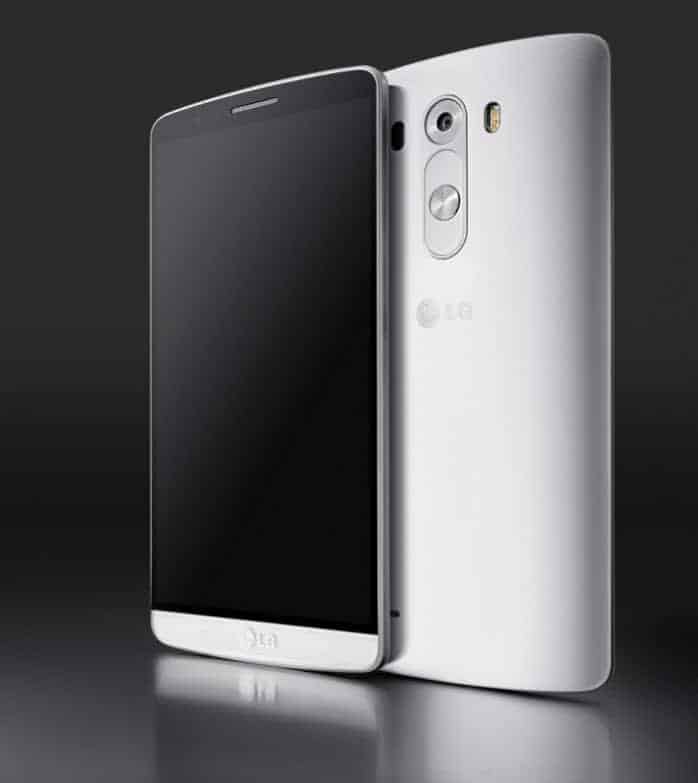 Both devices are like a work of art – rounded, smooth, comfortable to hold and beautiful to look at, but we will give a slight nod to the HTC One M8 because it is made of real metal, front and back. The next item that weighs in the HTC One M8's favor would be the dual stereo front mounted speakers – without a doubt the best sounding smartphone speakers and properly placed in the front for best sound and I will even throw in a few extra points for the HTC One M8's 5MP FFC. However, these comparisons are done based on specs – we cannot help but to allow the looks to play a part in our decision, the fact that both devices are sharp looking and easy to hold, and even though the One M8's speakers rock, and you can take a great selfie, they are not enough to overcome the LG G3 taken as a whole. The LG G3 has a larger and much better display, slightly better processor, more RAM in the 32GB storage model, better camera, and a larger battery. The HTC One M8 is a great device and has the nice novelty of the Duo Camera, but the LG G3 has laser auto focus and software that can produce very closely what the Duo Camera can do…taken in its totality, I choose the LG G3 as the winner in the comparison.

Please hook up with us on our Google+ Page and let us know what you think of these two smartphones – which is your favorite and why…as always, we would to hear from you.