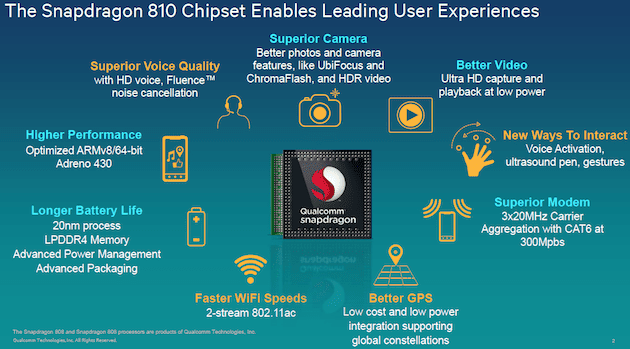 For a very long time now, Qualcomm's Snapdragon CPU has been at the top of the mobile processing ladder and it looks like 2015 is going to be another big year for the company. Announcing their latest and greatest chips unusually early, the Snapdragon 810 and 808 will be hitting devices in 2015 and are pegged to be the next big thing in mobile computing, let alone smartphones in general. Why are these pair going to be so special? Well, let's take a look.

The Snapdragon 810 features 8 processing cores, all of which are based on the newer ARMv8 architecture and are of course, 64-bit. Four Cortex-A57 cores will be used for high-performance tasks, and four Cortex-A53 cores will work efficiently to reduce battery drain and deal with mundane everyday tasks. The real "next-gen" stuff however is in the support for LPDDR4 memory and the Adreno 430 GPU which is said to be far superior to the 330 at the heart of the Snapdragon 800 and 801. The modem will be on-chip this time around and support LTE Cat6 as well as dual-stream MIMO over WiFI, delivering significantly faster WiFi transfer rates. Right now, all of this is a bunch of keywords on paper, but the promises put forward by Qualcomm here are certainly impressive, indeed. We should expect the Snapdragon 810 to take the place of the 801 and later this year, the 805 that will be launching in devices throughout 2014. 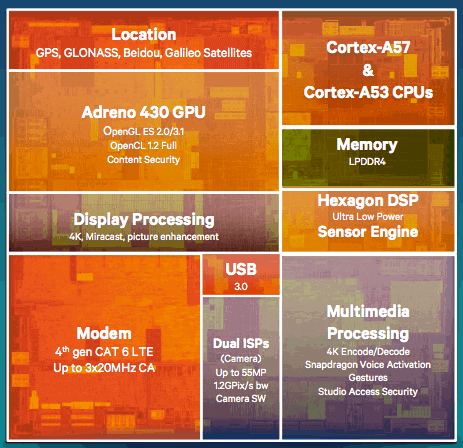 Moving on to the confusingly-named Snapdragon 808, and we're looking at a six-core CPU. Bringing two A57 cores together with four A53 cores, the 808 looks destined to become the new Snapdragon 600 for 2015. There's no LPDDR4 support here, instead sticking with LPDDR3 memory support and the Adreno 418 is used instead of the 430, however this is still apparently 20 percent better than the Adreno 330 a lot of using are using right now.

Qualcomm seem to have deviated from last year's simple strategy they had with the Snapdragon 600 and Snapdragon 800 processors and things are starting to get a little confusing. In February, Qualcomm quietly announced the Snapdragon 610 and 615, each bringing 64-bit support to the tablet, while foregoing the company's trademark Krait core designs. Now, we have the Snapdragon 801, 805, 808 and 810. Four processors to be rolled out in the space of two years, and we're yet to even see the Snapdragon 805 in a device on shelves just yet. It's beginning to look like Qualcomm is feeling the pressure from the likes of MediaTek and Nvidia, announcing such chips this early is an unusual move for Qualcomm and a decision we're sure the company didn't take lightly. Does this announcement of newer processors to hit early-2015 change the way you look at this year's flagships like the HTC One and Galaxy S5? Let us know in the comments below!