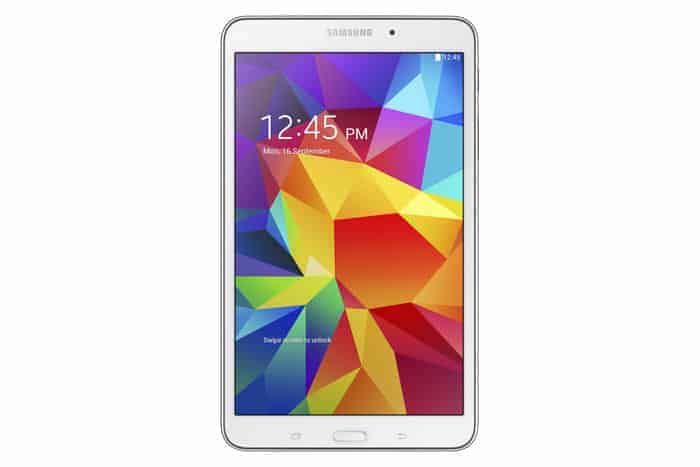 It might be April 1st, but Samsung has taken it upon themselves to announce the Galaxy Tab 4 family. We're not sure what persuaded Samsung to announce on such a day, but nevertheless Samsung's latest line of Android tablets is indeed now official. Coming in at 7, 8 and 10.1-inch versions, the trio of new tablets share many of the same specs and much like last year's Galaxy Tab 3 line, the specs here aren't all that much to write home about. For those looking for an affordable, yet a quality device, these latest tablets from Samsung could be a good compromise on price and performance.

Starting with the general stuff, all the Galaxy Tab 4 devices are powered by a 1.2 Ghz quad-core CPU, feature 1.5 GB of RAM, 16GB of storage (with an 8GB option available on the 7-inch) and there is of course a MicroSD card slot on all of these guys. Camera wise we're look at 3-megapixel shooters around the back and 1.3-megapixel cameras around the front. All tablets will presumably be available in both WiFi-only models and 3G or 4G models, too. All tablets will be available in black and white starting from Q2 this year.

Moving onto specifics and first up is the Galaxy Tab 4 7.0, featuring all of the above specs, which makes this the most dense display. Measuring  107.9 x 186.9 x 9 mm and weighing 276g, the 7-incher of the family is both the physically smallest and lightest. It's running Android 4.4 KtiKat like the rest fo the family and you can take a closer look in the gallery just below.

Moving up to the 8-inch version of the Galaxy Tab 4 and all the specs are the same, but the physical size here creeps up to 24.0 x 210.0 x 7.95mm and is a tad heavier at 320g. In what's more than likely going to be the "middleground" device for a lot of shoppers, the 1280 x 800 resolution here isn't the best, but the microSD card slot here helps it stand out from the likes of the Nexus 7 and should presumably be a little cheaper, although pricing for any of these has yet to be announced.

Price for the Galaxy Tab 4 family has yet to be announced, and there's no telling just what the "1.2 Ghz quad-core" CPU is right now, but we can't imagine anything too amazing, after all that's what the Galaxy Tab Pro line is for. Covering the bases for a lot of customers, the Galaxy Tab 4 line could do well for Samsung if priced aggressively. Let us know what you think in the comments below.