OnePlus’s bold nature seems to only have been heating up around the announcement of the HTC One M8, when they launched a comparison image showing the differences between the HTC One M8 and their upcoming OnePlus One device. The OnePlus One is scheduled to get an announcement and possibly a release near the end of this month. Just to recap, the OnePlus One is said to be under $400 where ever it’s available, and come powered by a 2.5 GHz Snapdragon 801 processor with a 3,100 mAh battery inside. We have yet to actually see the device first hand but the rumor is that it will have nearly non-existent bezels. The bezel is merely speculation, but this was gathered from the image that OnePlus released that showed a Sony Xperia Z1 from the back, but was stated was sitting on top of the OnePlus One. The OnePlus One is going to have a 5.5-inch display, so with a bigger screen than the Xperia Z1 but the ability to sit comfortably under it without being seen, extremely small bezels sound realistic.

In this newest comparison, OnePlus seems to be keeping the friendly insults at bay, and simply compares their device to the upcoming Galaxy S5 which actually is scheduled to launch in most regions on April 11th. The main points cover the difference in cost between both phones, with the OnePlus One costing under $400, and the Samsung Galaxy S5 obviously being well over that with a a price tag of $699. There is also a clear distinction between the difference in RAM with the Galaxy S5 coming in with 2GB at its disposal, and the OnePlus One having 3GB. The display is also bigger with OnePlus’s device, as it sports a 5.5-inch screen, where as the display on the S5 is only 5.1-inches.

While the OnePlus doesn’t come with a heart rate sensor, another thing they point out in the comparison, it does have an option for 64GB of storage where the Samsung Galaxy S5 currently only offers an option of 16GB. The S5 comes with a camera touting a higher resolution sensor with its 16MP to the OnePlus One’s 13MP, but the OnePlus comes with an Exmor sensor by Sony, and has one more lens than the S5, so it’ll be interesting to see which device actually takes the better picture. Quite possibly one of the biggest differences lies in the software, where the S5 will obviously continue carrying the Touchwiz torch, and the OnePlus One will be shipping with Cyanogenmod 11S running immediately out of the box. The OnePlus One is said to get an official announcement on the 23rd which is only a little over a couple weeks away. 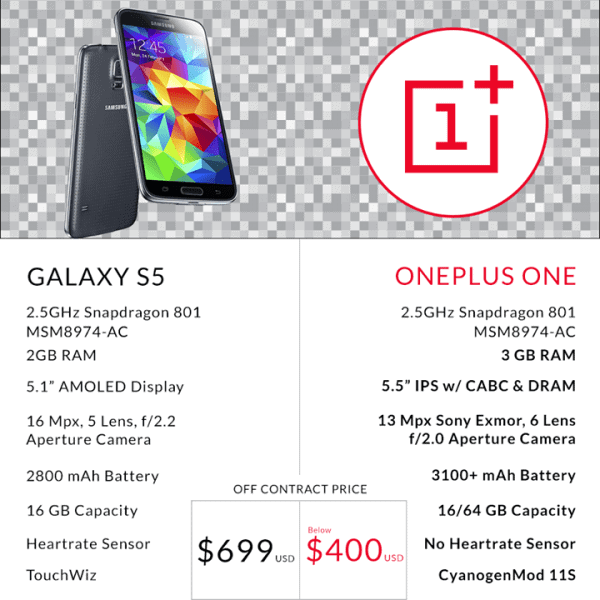