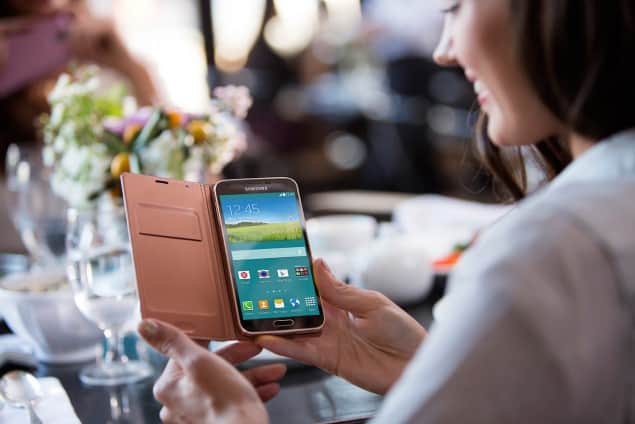 Looking for a great display on your next phone?  Samsung is saying it has the best, and it's using the recent award from DisplayMate to tout the screen tech in the Galaxy S5 as superior to all other phones on the market.  Samsung isn't just saying it has the best though, it's using stats of the device to prove itself, so you can be the judge of whether or not the screen is all its cracked up to be.  One of the big talking points Samsung has been pushing with the Galaxy S5 is outdoor viewability.  Now we've gotten around the problem of actually being able to see your phone's screen outside a number of years ago, but any kind of improvement in this regard is always welcomed, especially if it means you don't have to strain to see the screen outside at all.  When looking at the screen in the sun there are two main problems: glare and brightness.  Glare has been reduced on the Galaxy S5 by 4.5% according to Samsung, which means it's about half as shiny as the screens on other smartphones out there where the average reflectivity is measured at 10%.

Brightness is also a huge factor here, as out-shining the sun isn't exactly an easy task, but the screen on the Galaxy S5 looks to be easily the brightest AMOLED screen ever made.  Samsung uses a bit of a weird chart here, showing brightness levels inside an office or home and compares the S5 to the S4 and Note 3.  Outside things are very different though, as the Galaxy S4 can max out around 475 nits, which is a measure of brightness, but Samsung's new display tech on the Galaxy S5 can push all the way up to 698 nits of brightness.  This is compared with the 500 nits pushed out by the iPhone 5s screen to compare with a competing IPS panel.  Then there's also other AMOLED displays out there like Nokia's which can push up to 600 nits, all of which are pretty handily beaten by the Galaxy S5's screen.

Of course what's all this brightness if it's just going to kill your battery the moment you step outside of your home or office?  Samsung is claiming a 27% increase in display efficiency in relation to power, which is impressive no matter how you cut it.  When you look at your battery stats at the end of the day most people will find that the display is the biggest drain on the battery, although that percentage has been getting lower and lower as displays become more power efficient.  Samsung has been touting excellent battery life with the Galaxy S5, and this is likely one of the many ways they achieved that goal.

Lastly we look at the actual display quality and how the pixel make up of the display changes what you see.  Samsung had been using a Pentile Matrix design with the sub pixels in its displays for a while now, with the Galaxy Note 2 being just about the only exception.  This produced less than stellar results when compared with a similarly sized screen that boasts the same PPI density, as the Pentile nature of the screen means it's actually less dense than a competing RGB stripe screen.  For those who aren't sure what the heck this all means take a look at the picture below.  Essentially your screen is made up of millions of tiny dots, all arranged in a certain color pattern to produce the image you see on your screen.  Samsung's Galaxy S5 screen uses the same Diamond pixel design of the Galaxy Note 3, meaning that if you're content with the way that display looks you'll feel the same way here.  There are more green pixels than red or blue, but the red and blue pixels are 50% larger and are in a diamond shape.  This makeup helps with the longevity of the screen and gives it a more dense display than a standard Pentile Matrix layout would, but still not as much as an RGB stripe.  Overall that 432 PPI display probably looks more like a 330 PPI display up close because of the layout, but most people may just not care.