While a lot of the initial hype over the OnePlus One has started to fizzle out a little, people are still talking about the Smash The Past contest set forth by OnePlus that would give 100 lucky and randomly chosen individuals a chance to smash their phone and buy a new OnePlus One for only $1. After months of waiting and tons of teasers and leaks we finally got to see what the OnePLus One looked like in all it's glory not too long ago and while the phone does look quite impressive and has an elegant styling to it, there is one factor that people can't seem to forget which is the fact that the OnePlus One looks strikingly similar to the Oppo Find 7. Rumors had started surfacing that Oppo might actually own OnePlus, and that the company behind one of the most hyped phones of the year could simply be a sub-brand of Oppo to produce and sell a more competitive version of Oppo products. These are just rumors mind you and there is no evidence to completely support and confirm these claims, but there are a few things that suggest they could be more true than we might realize. Again though, these are just rumors, so take them for what you will.

According to Gizmochina, there is a public document that has surfaced that in their words, proves that OnePlus is a wholly-owned sub-brand of Oppo, listing that the institutional shareholder of OnePlus technical corporation Ltd. is Guangdong OPPO electrical industrial Ltd., who covers 100% of the investments. The documents in question come from Market Surveillance department out of Shenzhen, China, and were shown and brought to the public's attention by China public industrial and commerce.

While the source of the information may be one that most of us are a little less familiar with, a new source that we have known to be quite credible when it comes to leaks and data surrounding new tech devices has recently posted something about this same matter just this morning. Infamous leaker evleaks points out that the Whoisology Archive suggests the same claim, that OnePlus is a wholly-owned sub-brand of Oppo. The data in the Whoisology archive points to the Admin contact of OnePlus's website(oneplus.net), which surprsingly enough is the same company listed by the previous source, Guangdong Oppo Mobile Telecommunications Corp.,LTD. Perhaps the question that we should be asking though if any of this is actually true is, does it really matter? Whether OnePlus is a complete separate entity or not, they are offering a device that comes with amazing specifications at a less expensive cost. 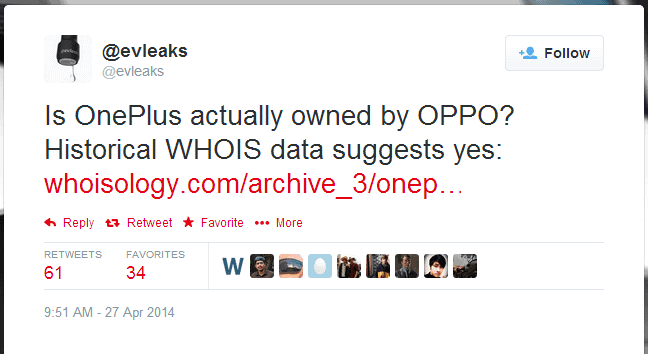