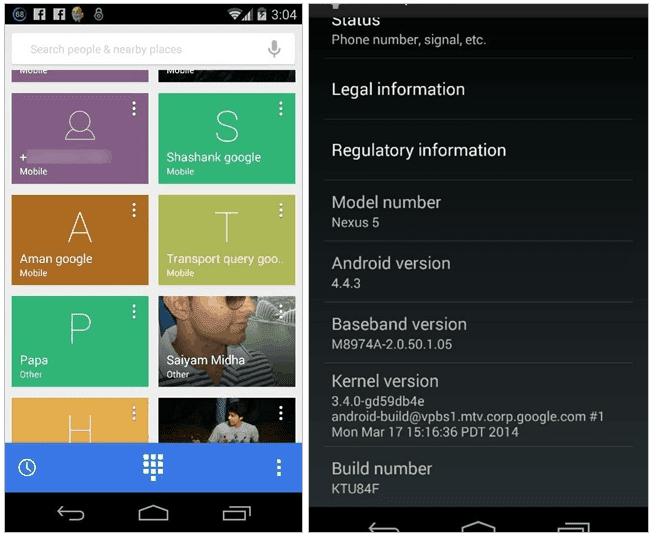 Here we go. More leaks about the next version of Android. Although this isn't Android 4.5 with Moonshine, that we've been hearing about. Instead it's the next point-release for KitKat which is Android 4.4.3. According to an user on XDA, this is the new dialer on Android 4.4.3. This update was actually slated to be released last week, but that didn't happen for whatever reason. We also expected it to be mostly bug fixes and not a whole lot of new features or even redesigns. But it looks like Google thought differently.

Looking at the screenshot above, it appears to be a bit more colorful. As the names that don't have pictures get a colored background. You still have the search bar up top, and the dialer button at the bottom. So there's not a huge difference here. But it does look a bit nicer. Maybe this is part of the redesign we are hearing about coming at Google I/O with the next major version of Android? It certainly is plausible. It looks a bit like the leaked screenshot that the Nexus account on Twitter posted the other day, but not quite the same. As it was a different page in the app that the Nexus account posted. We'll have to wait until the update comes out to be for sure. But according to this user, he is on Android 4.4.3. Which means we should be getting this new dialer any day now, as the update is ready to be pushed out. Or at least we were told it was.

You can see from the screenshots, that this was taken from a Nexus 5 running on Android 4.4.3, which the XDA user says is one of his friends. Either way, we should find out shortly if this is in Android 4.4.3 or not, and what other goodies Google has packed in there for us.