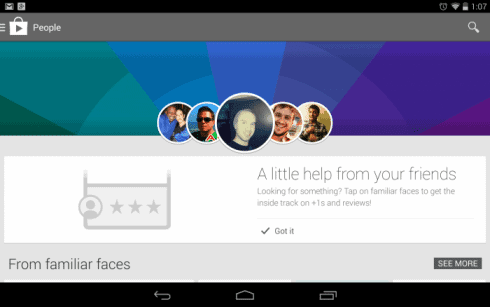 We love the idea of seeing relevant content within the Play Store. That's why were excited to see that Google has added in a new section within the Play Store called People, that allows you to see what others are interested in, have commented on, or give the coveted +1 to. On the flip side, others can also see content from you as well, so whatever you're into will show up for those who decide to take a peek inside the people section looking to see what others enjoy using. You won't find content from just anyone, as the section only shows you stuff from people that you have circled, but they do also have suggestions of people to follow who are likely people that are followed by people that are in your circles. So if a friend has left a review for a game or app that they have absolutely loved, hopping into the people section would pop up that particular app or game, alerting you to its existence.

Before this feature was implemented, the only way to see relevant content like games for instance was to open up Google Play Games, and look through your list of circles to see what others were playing. That only worked for games though and not apps so this is infinitely more useful if you're trying to remember that one app a friend told you about 6 months ago, but you seemingly forgot. You could also see which people from your circles had +1'd certain apps as long as you were already looking at that apps description page, but the new people section takes all of this information and puts in one place for you. If you're interested in knowing all the kinds of apps that your friends, family, and followers are into, it seems that this section will be able to service those needs.

That particular section doesn't seem to be live on either of my devices so it seems that the Play Store will need to update to include it. It appears to be live for some and not for others. We're not sure what the reasoning is behind that. Some who have this section live and accessible are on build version 4.6.17, while others like me are on the same build and can't seem to find it. The section is found by swiping in from the left edge of the Play Store where you find your My Apps section, so if you're interested in checking it out open up the Play Store app and see for yourself what others in your circles enjoy using.

Update: After finishing this publication the people section randomly showed up, so it seems just closing the app and restarting it may have kicked into gear.