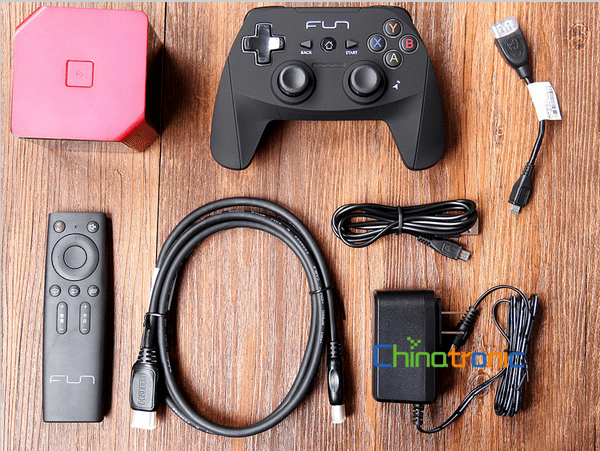 A new Android powered home game console is about to hit the market soon, and it's called the Funbox, because why not name your Android console after something you'll be having when you play games on it. Fun. The Funbox is ZTE's offering into the world of home Android game consoles, and it actually doesn't look too bad. Like the many before it though it could very well have a hard time excelling in an area that is highly dominated by mainsteram consoles. When you factor in that there are easy ways to simply connect your device display up to your TV and use a Bluetooth gamepad with it, the console almost seems unneeded. Despite the hurdles that might lay before it, the Funbox has some decently impressive specs, and comes in at an equally impressive starting pricetag. For just $159, the Funbox could be yours to hook up in your home. You just have to buy it from Aliexpress to get it.

So what does the new Android console have on the inside? You already know about the Nvidia Tegra 4 processor. Past that, you're looking at 2GB of RAM and 8GB of onboard storage for all those games. The box looks a little similar to the form factor of the OUYA, but different enough that it still looks like a new device. It has 2 USB ports, HDMI for connection to the big screen, and ethernet just in case you feel like its better suited than WiFi. As far as the Android side of things go, it's running Android 4.3 Jelly Bean, and not only does it play all the latest android games, but it has Dolby Digital audio support, as well as support for 4K video playback and Dual-Band WiFi, which might excite those who are interested.

At the end of the day, the console looks like it could put forth some great gaming performance, but how will it stand up to competitors? OUYA has been on the market already for over a year, and the powerhouse that is Amazon has just recently launched their Amazon Fire TV(which also plays games), both of which cost $99. Even after you factor in Amazon's $40 controller it's still $20 cheaper than the Funbox, and you can order it straight from Amazon with quick shipping if you have a prime account. Not to mention the free game that comes with the controller. So the Funbox may be a little late to the game, which could hurt them, but it has the Nvidia Tegra 4 on board so it can't be completely counted out.