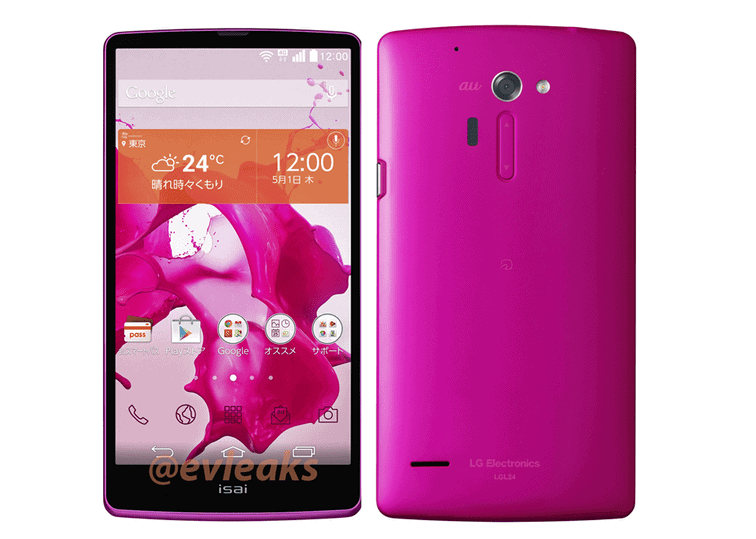 The next big announcement that the Android tech world is awaiting is the Google Nexus 6, which will again be made by LG (so far). However if one needs to get pointers as to what an LG-made Nexus device has to offer, one needs to look no further than the latest LG G series smartphone. Going by this logic, which has historically been proven to be correct, the Nexus 6 would be based off of the LG G3. But how do we know what the LG G3 would offer? That is where LG's Isai line steps in.

LG manufactures the Isai line exclusively for KDDI's 'au' wireless network and in terms of hardware specs, the line is very close to the LG G series. Reputed leakster @evleaks has tweeted the next LG Isai device – the LG Isai FL – in a hot pink colored back-plate along with its specifications. The device, bearing the nomenclature LGL24, bears the 'au' branding and speaks a design language which is very close to the current gen LG-made Google Nexus 5. In terms of specifications, the LG Isai FL sports a 5.5 inch LCD display and is powered by a quad-core Qualcomm Snapdragon 801 processor which is clocked at a whopping 2.5 GHz. An ample 2 GB of RAM is accompanied by 32 GB of internal storage which is thankfully coupled with a MicroSD slot. As of yet, we have no confirmation whether this MicroSD slot would support up to 128 GB of storage but we would definitely keep our hopes high. All these high-end specifications are juiced up by a 3000 mAh battery, while Android 4.4 Kit Kat powers the software. The LG Isai FL is rated as IPx7, which basically means the device will be alright if you immerse it in water up to 1 meter for 30 minutes. The 'X' means that dust certification for the device is pending, however if the water resistance is anything to go by, we believe the device would be dust tight atleast.

The volume rocker is present on the back of the device, below the camera, however the images also show us something unique – the device might bring a fingerprint sensor or a heart-rate monitor too. Atleast the images show a sensor on the back. All in all, the LG Isai FL does point towards good things for the LG G3 and by extension for the Nexus 6. However, we will keep our eyes peeled for new information and rumors.