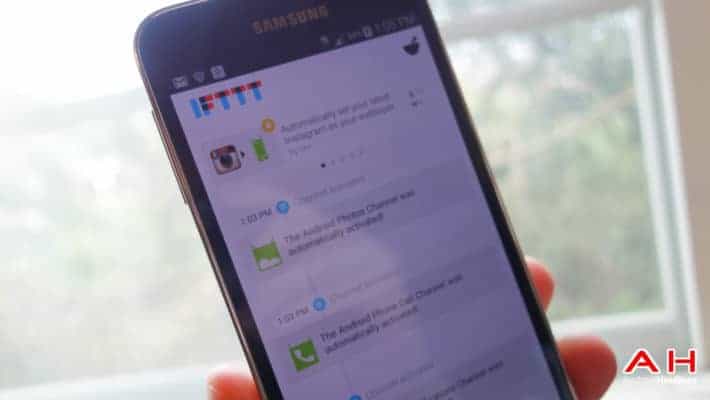 For those that haven't heard of IFTTT, it basically stands for If This Then That. It's an easy way to automate your internet life. I actually use IFTTT for both my own social accounts and Android Headlines accounts. There are all kinds of channels here including being able to tweet out the weather in the morning. Or tweet the score of a game for a specific team. Or the way we use it for Android Headlines, whenever something new hits our feed, it publishes it on Twitter, Facebook and Tumblr. It's a really great service that works really, really well.

With the IFTTT app for Android, you can do more than just automate your Twitter, Google+, Facebook, Instagram, Tumblr, and other profiles. But you can also automate your device. Which is pretty cool, and means the limits are endless, essentially. You can automate your phone to connect or disconnect from any WiFi network, update your wallpaper, send a SMS, and so many other things. It's a lot like tasker, but for some people it may be even easier to use than tasker.

As far as the UI goes, it does look a lot like the iOS app which was released earlier this month. Hopefully that changes, because if there's one thing we hate more than having apps developed for iOS first, is a port of their iOS app on Android. Like Instagram. But right now the UI does work pretty well for the app, so I don't have too many complaints, yet. That might change later on. The app is available on Google Play today, for free.

Are any of you going to take the IFTTT App for Android for a spin? Be sure to let us know what you think in the comments down below, if you do take it for a spin today.