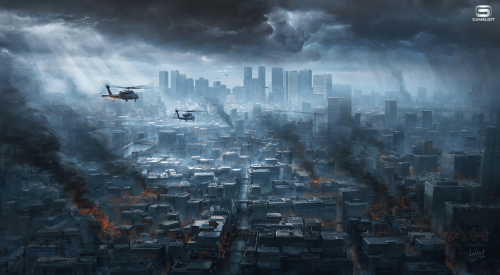 It’s been a long time coming for Modern Combat fans awaiting the highly anticipated next installment in the franchise, and the follow up to Modern Combat 4: Zero Hour, one of the most popular first person shooters on mobile to date. While details on Modern Combat 5 have been scarce, we at least know that it’s on the way and expecting a launch sometime this year, and like all past Modern Combat titles we can probably expect this game to cost $6.99 upon release. Modern Combat 5 has been the elusive beast that seems almost like a well known myth. Excitement has well been building over the next title for those who have played any of the previous ones, and today the excitement will build a little more as we have gotten some details from Gameloft about the next game in the series.

It’s to be called Modern Combat 5: Blackout, and we can expect the same jet setting romp around the world with tons of fast paced action and plenty of shooting(obviously), and is to be centered around thwarting a counter terrorist plot. Isn’t it always? The story of the campaign as some of you may have already suspected begins in Venice, Italy, where you take on the role of the games main protagonist Phoenix. Although we don’t have any details on the names of other characters or organizations within the game yet, a well armed terrorist group has acquired weapons of mass destruction(hey.. George dubya Bush is in this game?) and it’s your job to stop them and get the weapons back.

The game will take us through a number of locations around the world, but Gameloft points out that Tokyo has a rather compelling set of sequences that leads up to a riveting plot point within the game, where Phoenix has to convince his teammates to come to terms with something that will prove to be difficult to swallow and rather unsettling. We can certainly expect the multiplayer aspect to make its way back, although right now Gameloft had no details to share on the matter. They did mention however that there are more important details to share about Modern Combat 5: Blackout in the coming weeks though, and as we learn the good stuff we’ll be sure to post it for all of you chomping at the bit for more. The only thing I hope we see is some sort of seamless gamepad control integration to make the gameplay more familiar.