It seems that Google's tiny little HDMI streaming dongle is no longer just about streaming media and the occasional game. Google today looks to have added in the support for Google Drive, so users can cast presentations which makes this infinitely more useful within offices, schools, and just generally the workplace or anywhere people might be using Google Drive to, you know.. present stuff. The feature seems to be done getting tested and apparently works for anyone who has a Chromecast now so long as you have the Google Cast Chrome extension installed in your browser.

Now that we're on the subject, you can only use the cast Drive feature if you're using Google Drive on your desktop or laptop, but like we have started to see the tab casting feature come to Chrome for Android, there's a good chance that we'll see this casting presentations feature come to the Android version of Google Drive as well. So far there hasn't been anything to hint at that possibility but it makes sense. For now though you're limited to browser functionality. Casting a presentation is pretty easy, you just need a couple things set up and ready to go. The first step is obviously to have your Chromecast plugged into the device you want to stream to and have that device turned on, the second thing is the step that was listed above which is to make sure that you have the Google Cast Chrome extension installed in the browser. Once those two things are done, if you open up Google Drive and navigate to a presentation you have already created, or create a new one on the spot, you can hit the present button and at the bottom of the selection list you should see an option to "present on another device", which will stream the presentation to the connected Chromecast.

While this feature may not be entirely useful to everyone, it certainly helps make it more appealing and versatile for teachers who might want to use this feature within the classroom, and could also make it easy for students to cast their own presentations as well for stuff like class projects. Compared to buying an expensive setup to do the same thing, $35 sounds much more enticing than it did before. 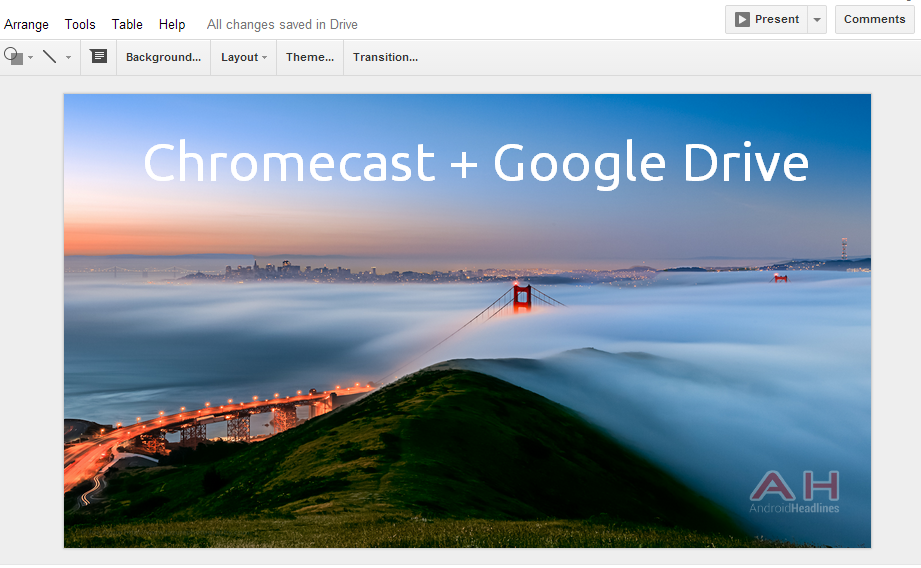 Advertisement
Trusted By Millions
Independent, Expert Android News You Can Trust, Since 2010
Publishing More Android Than Anyone Else
28
Today
125
This Week
499
This Month
499
This Year
101980
All Time
Advertisement