The great thing about technology is that faster, better, and even cheaper devices come along almost at a 6 month to yearly clip.  The bad thing about technology is that yesterday’s technology becomes obsolete – such is the case for the older CDMA networks.  Carriers have begun investing their money in the future, and that does not include the CDMA structure…they have moved on to HSPA+ and LTE networks.  As the CDMA technology reaches the end of its serviceable life, customers will have to “wean’ themselves off of their CDMA devices and transition over to the newer smartphones.

TELUS has already made the announcement back in September and now Bell is following their lead. Our source was able to get a screenshot of the upcoming plans that Bell has for closing down their CDMA network by the beginning of January 2017.  This should give ample time for users to pick up a newer device that will work on the newer networks – not always an easy task for customers on a low or fixed income, but soon there will be no networks left on which their CDMA devices will function…one of the downsides of new technology.

Bell has not said how many users will be affected by this change – a couple years back there were still over two million active subscribers, and while that number has certainly dwindled over the years, there is certainly a healthy number still hanging on.  Shutting it down at the beginning of 2017 will giving the remaining users plenty of time to transition off the slower CDMA network and on to Bell’s faster HSPA/LTE networks.

According to our source’s screenshot, on March 31, 2014, is when they started to shut down the CDMA networks in British Columbia and Alberta (excluding Edmonton and Calgary).  December 31, 2014 is when they will shut down in the Thunder Bay area.  The next move is scheduled for July 1, 2015 when Bell plans to shut down CDMA in Ontario, Quebec, Nova Scotia, New Brunswick, Newfoundland and Labrador and Prince Edward Island.  On that same date, shut downs for British Columbia (excluding Fort Nelson), Alberta, and parts of Quebec (areas surrounding Quebec City and along the Gasp© Peninsula).  Finally, on January 1, 2017, Bell will shut down all of their CDMA network.

Please let us know on our Google+ Page if you are still using a CDMA device and how you feel about the switchover – are you content with your slower CDMA device or looking forward to the faster service. 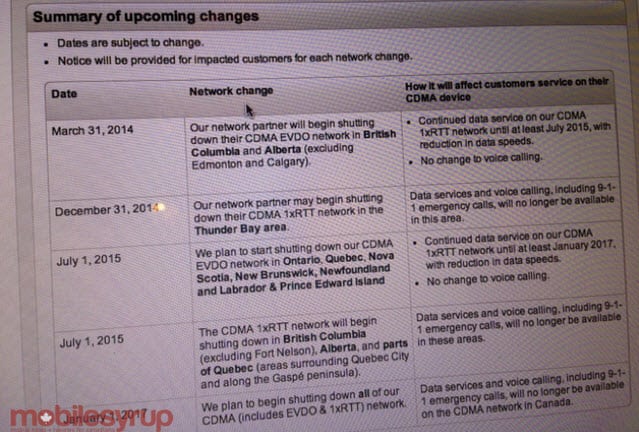