ASUS announced their ZenFone line of device back during CES of this year in January and while they’ve been available in Taiwan for a little bit now, they’re finally moving to other markets. Specifically the ZenFone 5, which is now launching in China. As part of the ZenFone line, there’s not much to expect from the ZenFone 5 really, as these devices are aimed at delivering decent performance in a well-built package without breaking the bank. Thanks to a little help from their friend and partner Intel, ASUS has certainly managed to put together a line of devices that look good and offer some decent performance.

The ZenFone 5 is going up for sale in China for just 999 Yuan, which works out to be around $160, which is a hell of a price for a device like this. If you can’t remember as far back as January (we won’t judge), the ZenFone 5 features an Intel Aton Z2580 dual-core CPU clocked at 2.0 Ghz, an 8-megapixel rear-facing camera capable of 1080p video recording and a 2-megapixel front-facing camera. Storage wise, we’re looking at 16GB of internal storage and there is room for microSD cards up to 64GB in size. Interestingly enough, the Weibo announcement lists the ZenFone 5 as featuring 2GB of RAM, which is twice the amount listed during the original announcement. We’re not sure as to whether or not this is a special version at launch, or this is the spec that ASUS has upgraded to, but it’s certainly nice to see at this price point.

For 999 Yuan, the ZenFone 5 is excellently priced, and there’s a good chance that it could be the device you’ve been waiting for, if you’re on a tight budget. The 5-inch, 720p display might not be as dense as many others, but it’s an affordable device that doesn’t act or look like one. Hopefully, we see ASUS’ first line of smartphones make it out of Asia and head west, as the Moto G has proven that there’s a lot of potential for budget minded devices over here. 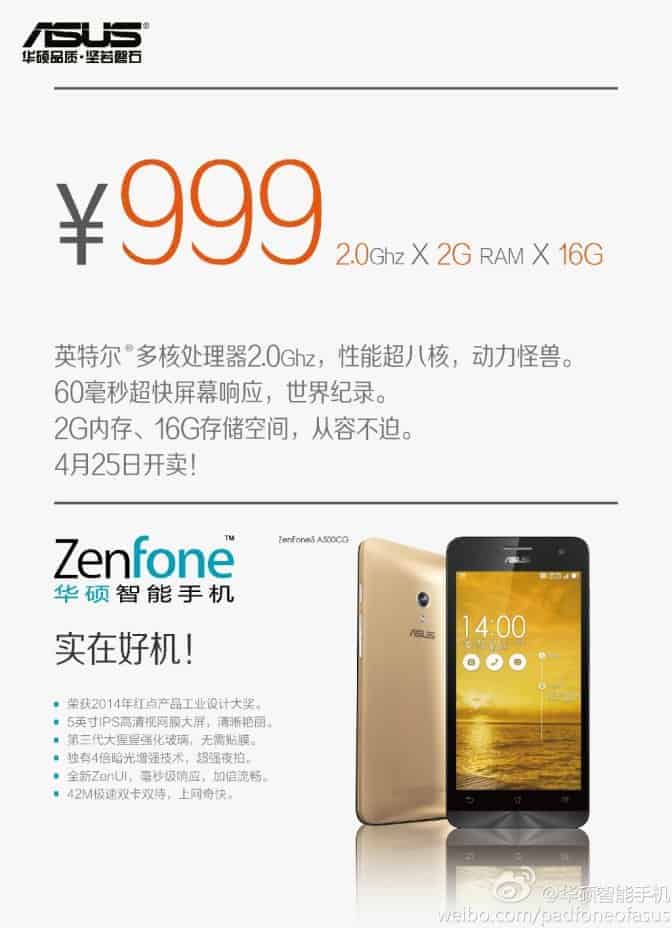