Every quarter we get new data from a number of different market research firms who specialize in tracking sales data and trends in the technology industry.  Kantar Worldpanel ComTech is one of said companies, and it delivers data based on 10 different countries and regions each quarter to show how the makeup of operating systems is changing all the time.  For years now Android has ruled the roost in worldwide marketshare, commanding in upwards of 70% depending on the quarter, trouncing rivals like Microsoft and Apple.  The first quarter of 2014 is already behind us, and as such we’ve got some great sales data to look at.  With no surprise Android has yet again built worldwide marketshare, now reaching 80% in China, 70% in Europe and nearly 60% in the US.  The Chinese market saw a whopping 8.1% growth over the 4th quarter of 2013, with phablets being the rising start among phone sales in the country.  If you’ve noticed a trend among Chinese manufacturers making more and more devices that are larger than 5 inches you’re not dreaming it up, and there’s a great reason for it.  These larger devices are lovingly referred to as phablets, and they now make up more than 40% of all smartphone sales in China, bridging the sizes between smaller smartphones and tablets by providing the functionality of both in many cases.

Europe has also seen some gains, but it has also seen some significant marketshare losses in specific countries too.  Italy is Windows Phone’s strongest marketshare region, with almost 14% of all Italians purchasing Windows Phones over other competitors.  Android made some big strides there this past quarter though, with 8.2% growth in the country, bringing the Android marketshare up to 70.7% there.  Spain and Great Britain weren’t as favorable though, with marketshare losses for the platform in both countries bringing the total numbers down a bit, but still reigning supreme wherever you look.  All this adds up to just a 1.5% growth rate of Android between the 5 European countries studied: Germany, Great Britain, France, Italy and Spain.  Windows Phone was the biggest winner here, pushing 1.6% of growth in the same period, while iOS only grow 0.1%.  Japan continues to remain iOS land, and is the only major country at this point to continue to adopt Apple’s OS in record numbers.  iOS actually grew 8.6% in Japan, while Android fell 4.5%.  iOS now owns 57.6% of marketshare in Japan, with Android all the way down at 41.5%

The US is the biggest story here though, with iOS losing a significant amount of marketshare after many subsequent quarters of growth.  In fact iOS is now at its lowest point in quite some time, with only 35.9% of new smartphones sold running iOS.  Android on the other hand has completely picked up that marketshare loss and more, now retaining the crown and eclipsing iOS by well over 60%, now sitting at 57.6% of all phones sold in the US.  The real question here is what has made the change?  The Galaxy S5 and HTC One M8 were not out at the time of this study, but many phones like the Galaxy S4 went on heavy sale, with many carriers giving it away free on contract during this time period.  How does this bode for Android’s marketshare this next quarter?  With many top-tier phones coming out in the next 2 or 3 months including the incredibly cheap and well-specced OnePlus One, we expect to see Android grow in marketshare once again. 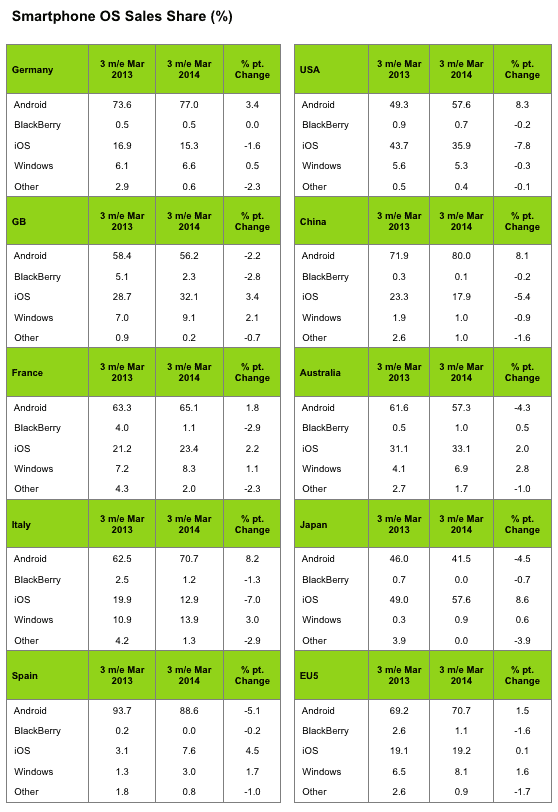