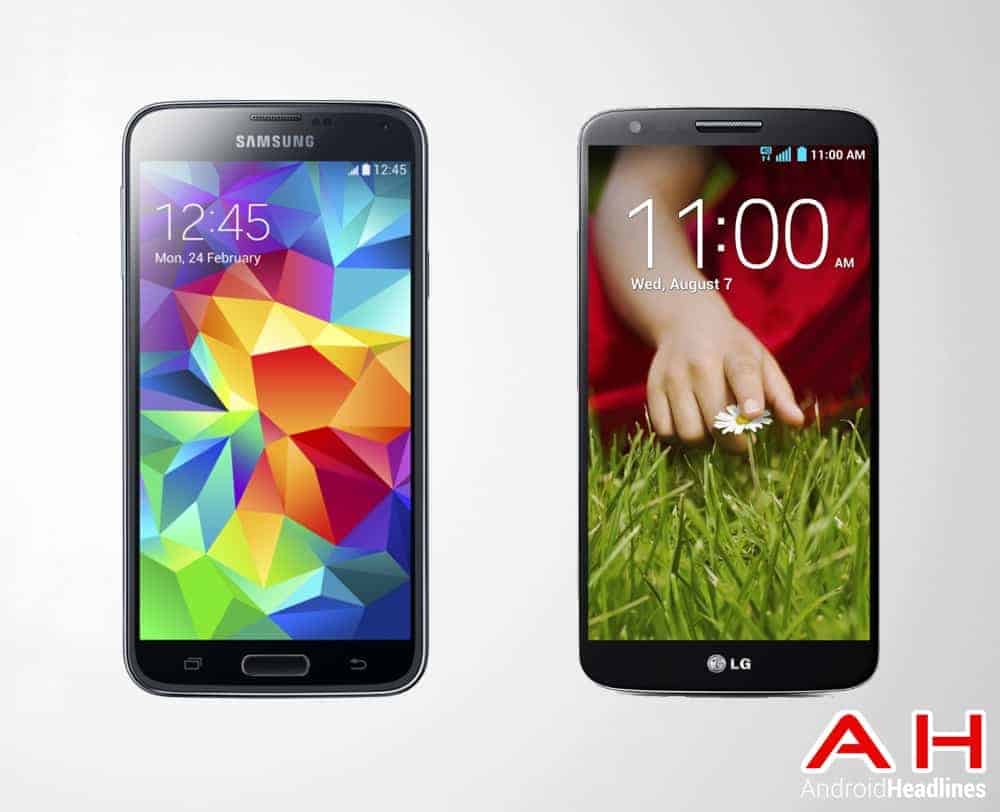 Here is the comparison between the very popular LG G2 from the end of September and the newly released Samsung Galaxy S5, the follow-up from the most popular Android device of all-time. Normally, the new kid would blow last year's model completely out of the water with more RAM, faster processor and larger display – but things are very different this year. There are no new, mind-blowing processors out there…maybe later this year, but not now. The technology improved so much, so fast, that it has kind of hit a 'brick wall,' so to speak and we are still waiting for the next generation of 64-bit, true eight-core processors.

These two devices are very similar – from their mere physical size and weight to the screen size, amount of RAM (2GB), amount of internal storage, and even battery size. By the time you read this the LG G2 should even have its Android 4.4.2 KitKat upgrade in place. This will be a tough one to decide as I have not even chosen the winner's picture yet! Take a look over the specifications below and then we will discuss about each individual device and finally make a selection of the best of these two great smartphones. 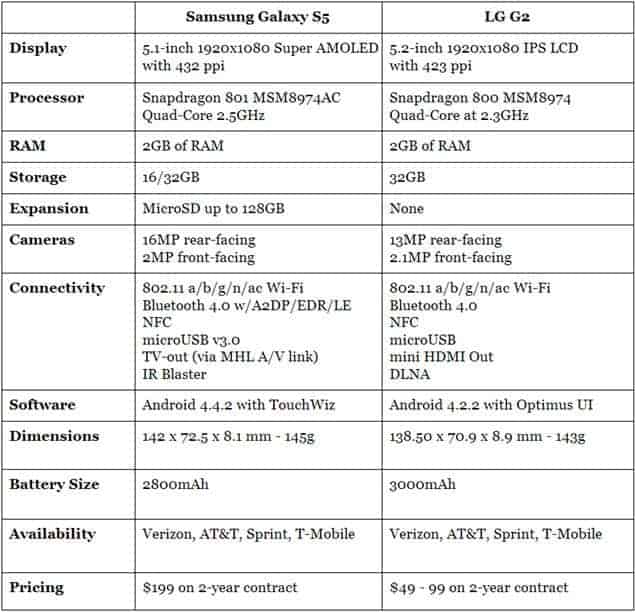 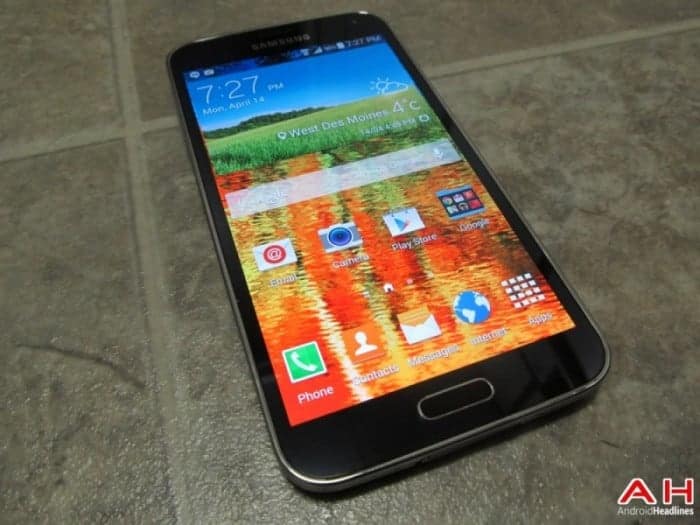 The new Samsung Galaxy S5 is a solid device, despite its 'dimples' – you know most people think dimples are cute…and I am constantly reminded about that by all of the girls…just saying. The Galaxy S5 comes to us with a new and improved Super AMOLED display – it is brighter and can display natural colors if the bright and over saturated look is not for you. It has the latest and greatest processor out there, but it is basically an overclocked Snapdragon 800 that the LG G2 has in it. It does have room for a microSD card to add up to 128GB of internal storage and the LG G2 did not include a microSD slot. The camera in the Galaxy S4 was a great camera, and Samsung added additional megapixels for an increase from 13MP to 16MB versus the 13MP on the LG G2, and added their new ISOCELL technology for better low-light pictures. The battery is only slightly smaller than the G2's 3000mAh, at 2800mAh, but Samsung was really able to increase the battery life in the new Galaxy S5 and the device even offers a couple of modes to help extend it even further – especially the Ultra Power Saving Mode. The Galaxy S5 also includes USB 3.0 technology and is now water/dust resistant. Pricing is great on a two-year contract at $199.99 and Verizon is offering a BOGO offer – two for $199.99…not bad at all! 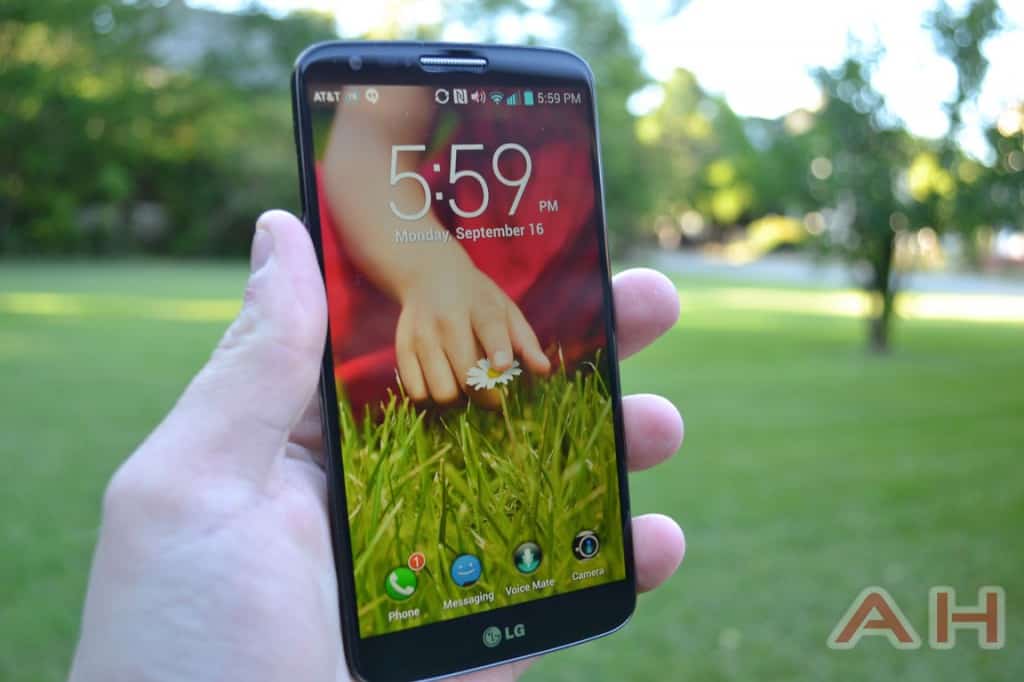 The LG G2 is a great device and is loved by many techies whose opinion I respect – but it is from September and can it really stand up to the newest Samsung Galaxy S5? As strange as the dimples are on the back of the S5, what about those buttons on the back of the G2 – yeah, you heard me, the on/off and volume controls are smack dab in the middle of the back, directly below the camera…what is with that? Well, it seems that it takes a little while to get used to using, but once you do it becomes quite natural, especially with the included KnockOn feature to wake up the device without touching the buttons. The camera is only 13MP compared to the Galaxy S5's 16MP, but the LG G2 does take great pictures and is a favorite of Alex, that reviewed the LG G2 in great detail. 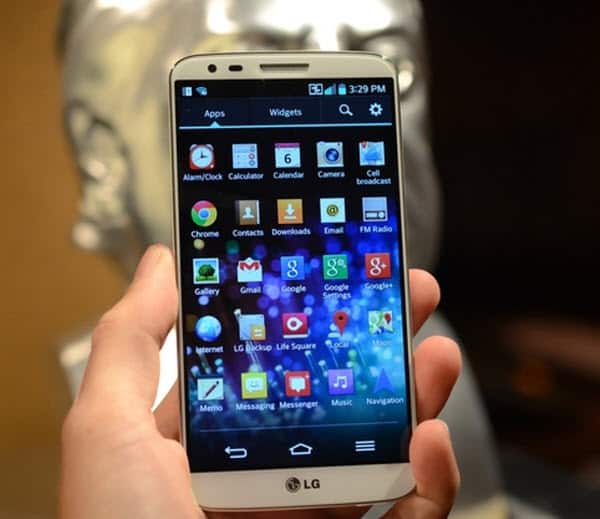 The LG G2 – I know, it shocked me too, but when you look at both of these devices, the LG G2 is still a solid choice. It is true that the processor of the Galaxy S5 is slightly better, the camera may be a little better (that's maybe), the Galaxy S5's display should be better, and yes, it does have USB 3.0, a fingerprint scanner, and a Heart Rate Monitor, but those are not compelling reasons to buy the Galaxy S5 over the LG G2. The water/dust protection is a great feature, but not in itself reason enough to buy the S5. The battery life on the LG G2 is outstanding, and tests show the LG G2 still easily wins over the Galaxy S5. When a new device is released, it should be the indisputable winner in almost every area and the Galaxy S5, while a great device, simply does not excel enough over the LG G2…and the real deciding factor is value. The G2 can be found for as low as $49.99 on AT&T on a two-year contract and as high as $99.99 on other networks – the price is just too hard to beat for the device that the LG G2 delivers.

Please hit us up on our Google+ Page and let us know what you think about this phone comparison – we would love to hear your comments.