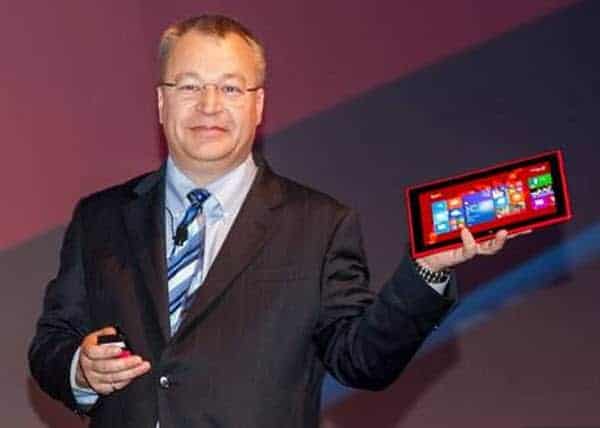 For the past couple of years Elop has moved around so much, most people thought his first name was 'Former;' but his real first name is Stephen.  He has certainly be in the news these past few years – going from Microsoft to head the failing Nokia, and in order to lift them back into prominence,  his idea was to make an exclusive deal with his former employer to manufacturer only Windows Phones.  With Nokia still failing due to lack of interest in the Windows Phone platform – it had nothing to do with their quality – under Elop's short watch (February 2011 to present) Nokia went from the largest phone manufacturer to the tenth. He then made another deal with his former employer to sell Nokia to Microsoft for a mere $7.2 billion. After he made that deal of the century, looking at it from Microsoft's point-of-view, probably as part of the 'package' deal, his former employer, Microsoft, hired him back – I'm sure he thought he may even get the CEO job that was being vacated by Steve Ballmer.  Thank the heavens, and I am sure that is what Microsoft's shareholders were doing when Microsoft chose Satya Nadella instead of Elop.  This former Microsoft executive, now former Nokia CEO, will be named Executive Vice President of Microsoft Devices Group on completion of the acquisition of Nokia's Devices & Services business.

Microsoft's CEO Nadella confirmed all of this yesterday and have already been working to make sure that Nokia's Devices and Services business will integrate with Microsoft when the Nokia unit becomes part of Microsoft – the final deal is expected to close by the end of April.  Surprisingly, or maybe not, the two worked closely together during Elop's tenure as CEO of Nokia.  Nadella expressed in an email to Microsoft employees that Elop will help merge the leaders from Nokia Devices and Services with the current executives that lead Microsoft's Device and Studios team.  Elop will also 'partner closely' with Phil Spencer, newly appointed to lead the combining of  Xbox and Xbox Live development teams with Microsoft Studios team, and Terry Myerson, Executive Vice President of the operating systems group. Nadella said:

"Combining all our software, gaming and content assets across the Xbox team under a single leader will help ensure we continue to do great work across the Xbox business, and bring more of the magic of Xbox to all form factors, including tablets, PCs and phones.  We expect to close the acquisition by the end of April 2014."

When it was announced that Nedalla would be appointed Microsoft's new CEO, he told the employees that it was their job "to ensure that Microsoft thrives in a mobile and cloud-first world."  He is excited at partnering with Nokia and said, "The mobile capabilities, hardware design expertise, and world-class manufacturing and supply chain operations they bring will help us drive innovations in devices to delight our customers."

He realizes that the future of Microsoft rests on being innovated in the mobile and cloud environment – they need to look to the future if they want to compete on a global stage. This was something that former CEO Steve Ballmer never seemed to understand and former, and now employee once again, Stephen Elop was not capable of grasping or executing. But former employee Elop did his job in bringing Nokia into the Microsoft fold…it will be interesting to see what Microsoft does with this newly acquired asset. Let's hope they do not waste Nokia's talent for making a great device – with Nedella finally guiding Microsoft, I think they will do a better job.

Please let us know what you think on our Google+ Page about the Microsoft-Nokia relationship – do you think that with Elop at their helm he ever would have decided to go with Android rather than the Windows Phone platform…we would love to hear your opinions.