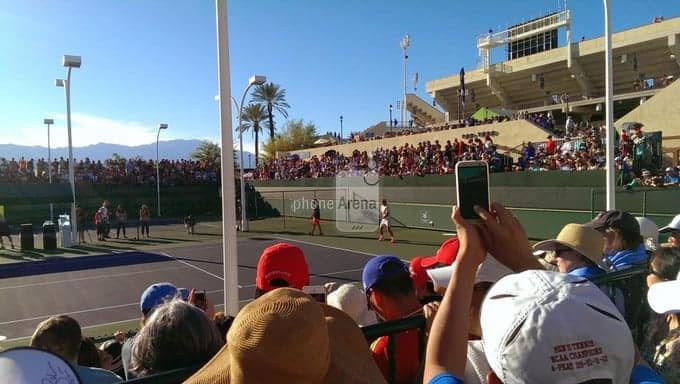 I wonder how many more leaks we'll see of the HTC One M8? We've already seen just about everything about the HTC One already, including learning what the duo-camera feature is all about – Thanks Telstra. Today, a reader of PhoneArena sent in a picture of a guy with a phone taking pictures at a Tennis match. Which ordinarily we'd just skip over it, but it looks like he's using the HTC One. As you can clearly see the front-facing Boomsound speakers, and the curved corners, which are a bit more curved than the original One.

Looking at the picture it looks the device does have a case on it, which makes sense as you'd probably drop it holding it up that high to take pictures. But then again, this is an unreleased device that is still technically a "secret". HTC has more than likely cracked down on whoever is distributing these units to testers and such to take steps to conceal the device from prying eyes like ours. But it doesn't look like that's helped them much, as we still know it's the HTC One.

We're still awaiting the HTC One Announcement on March 25th, which is two weeks from today. HTC will be having a joint event much like last year. Where they are doing events here in New York City and in London. Hopefully all of HTC's secrets haven't been revealed yet, especially since we don't know the specs – since none of the 'reviewers' talked about the specs at all – but I'm anxious to get the device announced so we can move on to other leaks, like the LG G3.

The HTC One is still going to be a great device, and I think it'll sell well if HTC can get their marketing together. We'll cross our fingers and hope they do get that marketing department in shape this year.