In the East, it looks like Android devices are getting bigger (as well as better) in order to entice budget-minded buyers into picking up one of their lower-end devices. Less known manufacturers have been doing this in China and elsewhere for some time now, with designs that take a little more than “inspiration” from Samsung’s Galaxy Note. This year however, we saw HTC announce the Desire 816, a 5.5-inch device that ticks most of the right boxes while aiming for a much lower price point. Now, it’s the famous Xiaomi’s turn, with the Redmi Note, again coming in at 5.5-inches.

It was rumored that this device was to be a second generation of the Redmi device that Xiaomi offers for those on a tight budget, but instead it appears to be a new line of products. Starting later this month, with the sale of this, the 5.5-inch Redmi Note complete with a 720p display, a MediaTek MT6592 Octa-Core CPU and of course Xiaomi’s MIUI custom firmware that seems to be mighty popular in the East. Pre-orders for the device will be starting in China this Wednesday and the device will be available in earnest from March 26th this month. Instead of just giving us the pricing upfront, the Chinese manufacturer is holding a contest for 50 lucky winners to get their hands on one, by guessing the price instead. This isn’t too bad a strategy, and should drum up some coverage for the device over in China.

While the Redmi, which launched last year with its 4.7-inch display has been looked upon as simply a “cheap” handset here in the rest, it’s an important device for Xiaomi. After all, there’s more competition in China than we all realize, and with the Redmi Note they’ve fired a salvo directly at HTC and their Desire 816. With the budget handset market not only becoming more competitive, but more capable as devices in general, we expect even more of these devices to go on sale throughout Asia and beyond. 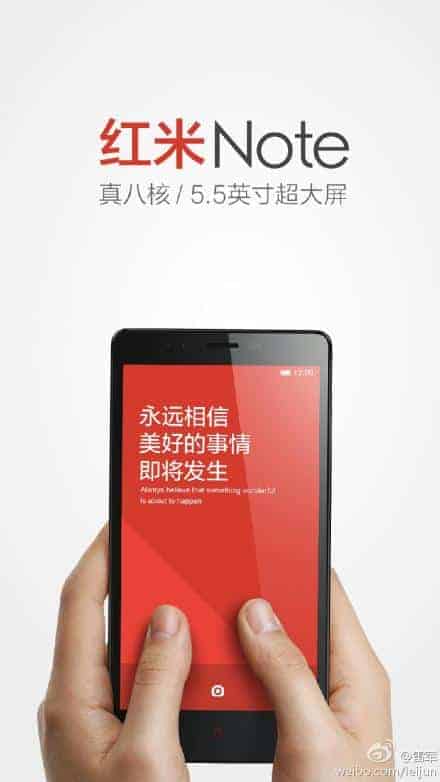