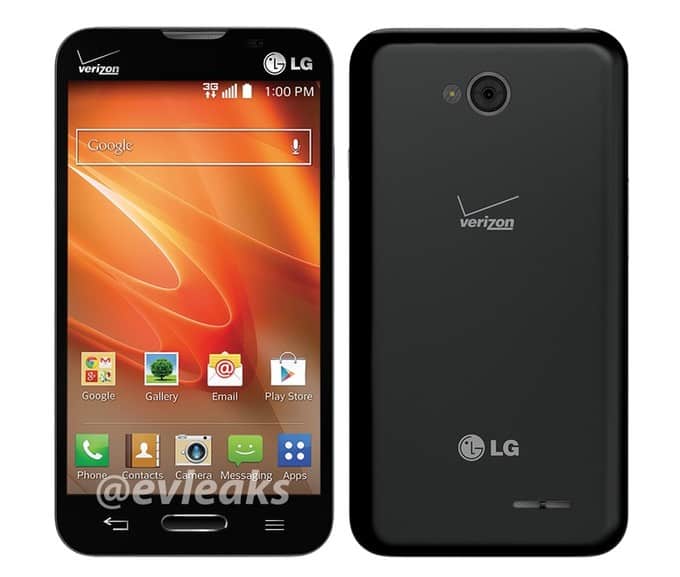 Much like Samsung, LG likes to put out a lot of devices each year. Ranging from low-end to high-end. In fact, at Mobile World Congress last month LG announced about 5 new low-end smartphones, that likely won't come to the US, but they did announce them. LG has been pretty good with Verizon over the years, providing them with plenty of phones for their low-end tiers and prepaid tiers. Now we're looking at another offering for Verizon Prepaid that should be heading their way soon.

According to famed leaked @Evleaks, this is a press shot of the LG Optimus Exceed 2. Which is going to be on Verizon Prepaid, and likely only have 3G connectivity. Evident by the 3G icon in the status bar and the 4G LTE logo being absent from the back of the device. We don't have any clue about the specs on this one, but I'd expect something around a 4-inch display, Qualcomm Snapdragon 400 processor and possibly 8GB of internal storage. It'll probably also be around $100-150, since it is coming without a contract – hence the Prepaid option.

Lately, we've seen that LG is keeping their physical buttons on their lower-end devices. Which is evident here with the physical home button and capacitive back and menu buttons. It's also got the Verizon logo on the front, similar to the G2, except this one doesn't look like it was crammed in there. Hopefully we'll learn more about the LG Optimus Exceed 2 in the coming weeks. But for now, we know that it's a low-end smartphone from LG that's heading to Verizon Prepaid. So we'll keep our eye out for it.

Does anyone actually use Verizon Prepaid? I haven't heard many people using it, mostly AT&T and T-Mobile prepaid – again mostly because you can use unlocked devices on those. So if you use Verizon Prepaid, or know someone that does, be sure to let us know in the comments below.