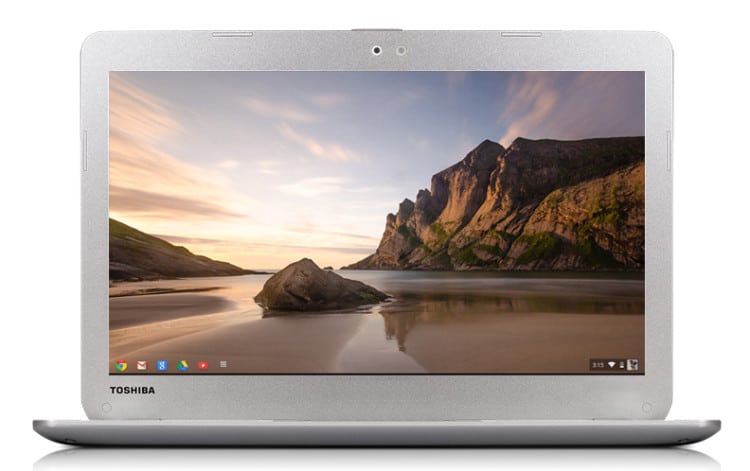 If you thought that Chromebooks weren't capable of hacking it compared to normal notebooks, you'd be wrong. Chromebooks and the OEMs that produce them are attempting to make waves and are finding themselves successful. Because of this success, we're starting to see more and more Chromebook offerings and variety for the notebooks that run Google's Chrome OS. Just how successful have they been? According to NPD, Chromebooks made up a total of 21 percent of the entirety of all laptop sales in 2013. That number could be higher but that's arguably better then it was in 2012. And, with more options for Chromebooks like Samsung's new Chromebook 2 and Toshibas first ever Chromebook offering, among others to come this year, Chromebooks only stand to gain even more of the over all notebook sales. We wouldn't be surprised if they saw a decent lift over their piece of the pie from last year.

Plenty of things make Chromebooks more and more appealing. Ultimately a large portion of it has to be their combination of lower cost but decent hardware. The nice thing about Chromebooks is that they give consumers a familiar tool to work with to do the things they might already do on a daily basis. Watching video, checking email, web browsing and taking notes are all things that can be done from smartphones, phablets and tablets these days, but with Chromebooks mostly ranging in cost from $200 to $400, they not only provide a lower price point for consumers to work withcompared to many tablets and larger smartphones, but they do so while also giving them things like a keyboard, USB ports, and a larger screen to do things that they require a web connection for. On their quest to make Chromebooks more mainstream, both Samsung and Toshiba seem to be finding a middle ground of how they can offer a Chromebook that will capture more people's attention for a low cost but with as high of quality specs as possible.

Samsung has the more powerful of the two devices, which is evident by the double amount of RAM that they packed inside,(4GB compared to Toshiba's 2GB)and we can't help but wonder if their Exynos octa-core processor will do better than the haswell based Intel celeron processor inside the Toshiba. Both Chromebooks offer a screen size of 13-inches, which is a first for Chromebooks in general. There have been plenty of 11-inch Chromebook offerings, and HP has the Chromebook 14. Screen size may be the same on these two, but Samsung's will be higher quality with a resolution of 1920 x 1080. With the Toshiba Chromebook users will be getting a resolution of 1366 x 768, that's not too bad, but it could be better.

Style wise, Toshiba's Chromebook(at least for me) wins the crown. It has a cleaner look with the design of a matte silver case that has a slightly perforated look, that actually looks pretty slick. Samsung's appears to have a more premium look and feel about it compared to their original Chromebook, but does the stitched faux leather really belong on notebook casings? Overall and regardless of the design, Samsung's Chromebook 2 will be a vast improvement over their original model brought out in 2012. It's reportedly longer battery life and higher screen resolution for a lower cost will probably be enough to grab many would be future Chromebook owners, and the Toshiba Chromebook coming in at $100 less than Samsung's 13-inch model of the Chromebook 2 is sure to win over consumers who like the lower price but bigger display.  In the end, both new Chromebooks seem like they stand a great chance at helping to launch Chromebooks as a whole to new heights.