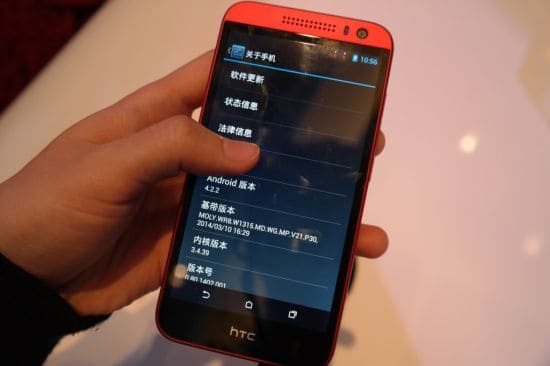 Yesterday saw the official launch of HTC's new flagship handset, the HTC One M8, and today we have details of a new smart phone being approved by the Chinese authorities called the HTC Desire 616/616w. This looks like the successor to the Desire 600, released back in May 2013, and as such, the Desire 616/616W carries middle-of-the-road specifications. Whilst the new HTC One M8 might be grabbing all the headlines for its high specifications, mid-range phones like the Desire 616 are what HTC hope will shore up the companies finances, and help regain momentum lost to Samsung, and more recently LG.

So, what is the Desire 616 offering us? For starters it has a plastic shell, is powered by a processor manufactured by MediaTek, who are quite popular where low to mid range phones are concerned. In this case a MediaTek Octa-core 1.7Ghz CPU is in the engine room, with 1GB of RAM to complement it. The phone boasts a 5-inch 720p display, so it's definitely not 'mini-sized'. On the photography side of things, there is an 8MP camera with LED flash on the rear. No details were available as what camera was on the front of the device, but it's fairly safe to say, at most it will be a 2.1 MP camera, good enough for selfies and video chat. There were also no details available regarding the battery size. The Desire 616 weighs in at 150 grams, and has the dimensions of 142 x 71.9 x 9.1 mm. As with many of the more budget conscious smart phones, the Desire 616 will be a colorful phone; available in black, blue, white, red and yellow flavours. Unlike the Desire 600 that it likely replaces, the Desire 616 doesn't feature BoomSound speakers. Another possible negative is that the handset is running Android version 4.2.2 JellyBean, which seems a little strange on HTC's part, given that Android 4.4 KitKat offers many performance optimizations for devices with lower memory.

There is no official launch date at present, but you would think after having been approved by the Chinese authorities that it should be relatively soon. Pricing and availability are also unknown at present. This isn't a handset that will set the world alight, but it seems a solid mid-range performer on paper, notwithstanding the older version of Android that it's running.  Let us know your thoughts in the comments or via our Google Plus page.