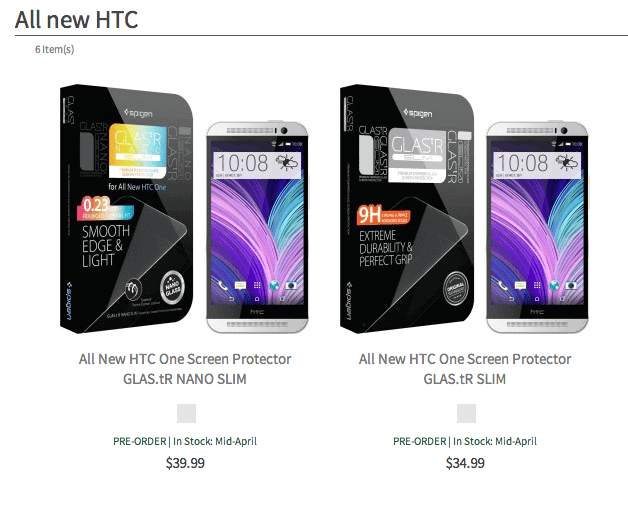 Lately, Spigen has become pretty popular for outing new devices and their release dates. We've seen them post cases for the Nexus 5, iPhone 5S, Galaxy Note 3 and a few others. Now it's the HTC One 2014 turn. We already saw them post cases with the name of "The All New HTC One", however now all the accessories for the HTC One 2014 are now showing as being in stock beginning mid-April. These accessories include screen protectors, cases and more.

Mid-April sounds about right for a launch of the HTC One 2014. Although it could launch before that as usually most cases aren't actually available on launch day. Next week, HTC is announcing the HTC One 2014 to all of us, but we don't know if they will have any surprises up their sleeves, hopefully they will since we know just about everything about the HTC One 2014 already thanks to numerous leaks.

As far as the accessories that Spigen has, they will have four different screen protectors starting at $9.99 for a three pack and ranging up to $39.99. They are taking pre-orders for these screen protectors and for their two cases. One case is on sale for $24.99 which is the Case Slim Armor, the other is the $14.99 Ultra Fit Capsule. Both are really nice cases, and as usual Spigen has done a great job creating these cases. According to Spigen, it appears that HTC is looking to release the HTC One 2014 within three weeks of announcing it, which would put it right around the Samsung Galaxy S5's release date of April 11th.

We should learn more about the HTC One 2014 next week. We have been hoping that they'd announce the smartphone and say it'll be available next week. Kind of like what Apple does. As that would be pretty amazing. Most OEMs make you wait a month or so. Or in Samsung's case, about 6 weeks. Which by that point, some people may have forgotten about that phone. So we'll learn more on March 25th.