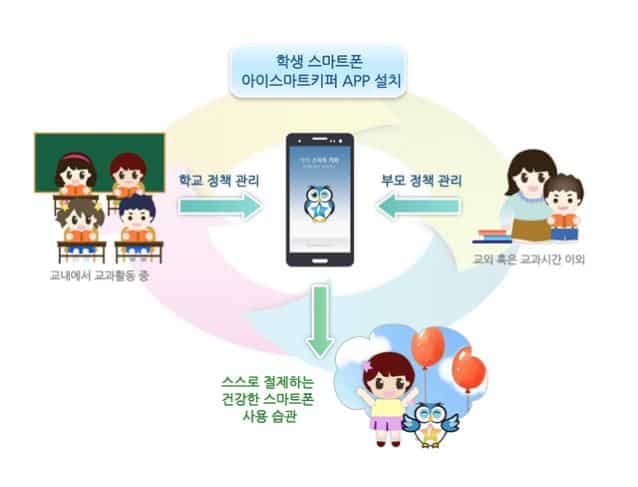 More children than ever have smartphones, and more of them are using their phones at school than ever before. Teachers and school systems are looking for new and innovate ways to control kids' phone use. Schools in South Korea have been testing an app called iSmartKeeper and they think it's the answer to controlling kids and their smartphones while they are in school. Sometimes the app over steps its bounds and continues to control kids' phones after they leave school, too.

iSmartKeeper lets parents and teachers restrict the apps that students have access to, and also the services they can use. The app settings allow for limiting apps and services during certain times of the day. Things can be locked down while students are in class, opened back up while they are on recess and lunch, and then students can have full access to their phone when they leave school for the day. iSmartKeeper even allows for GPS-based geofencing so phones can be restricted automatically when students arrive on school property, and they'll be automatically unrestricted when students leave. This doesn't always work, though, with some students reporting that the app continues to restrict their usage for hours after they leave school.

South Korean schools don't want to ban smartphones completely. These types of bans rarely work anyways. Schools also use educational apps that let students learn right on their devices, so they can't ban these devices altogether. The iSmartKeeper app has been tested in 11 schools in South Korea's capital of Seoul. Other provinces have also been testing the app, and the results have been hit or miss. Korean children have taken to rooting their Android handsets to successfully circumvent the app's restrictions. The app is also only available for Android devices currently. South Korea is a predominantly Android-based country, with OEMs like LG and Samsung based out of the country. iOS and Windows Phone devices do exist, but the iSmartKeeper app isn't available for those platforms yet.

Some opponents of these measures cite human rights concerns over the hijacking of kids' smartphones. Parents must sign a waiver to have the app installed, but it's still being installed on students' personal devices. Even so, it's been recommended that 677 schools in the Gangwon province of South Korea start using the app immediately. Other provinces are continuing to test the system before they make a final decision.