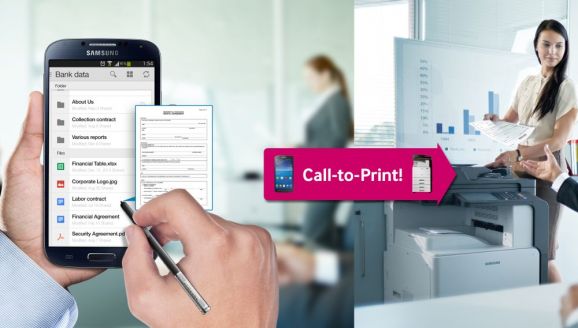 With the advent of the latest and greatest iteration of Google's Android platform, Android 4.4 Kit Kat, Google had unveiled a cloud printing solution which provided smartphone users the power to issue prints directly from their device. While Android 4.4 Kit Kat gives Cloud Print facilities to users, Samsung has, in its quest to create rival services to those of Google, has announced the launch of their own cloud printing service. Samsung's Cloud Print solution was announced at CeBIT 2014 in Hannover, Germany and stated that this service is targeted for small and medium businesses (SMB) and is strengthened with added security features.

Samsung's Cloud Print app is an extensive mobile cloud printing solution, which would allow business users to take prints from both in and out of the office. The app is designed to work with NFC enabled printers – which is currently restricted to a few Samsung Xpress-branded printers – and can connect to as many as 20 printers simultaneously. A key selling point of the Samsung Cloud Print is the ability of Call-to-Print which basically removes the middleman computer device from the process, and everything can be done from the phone itself.

Samsung will launch the Cloud Print service in June this year for the Android platform, while iOS users would have to wait a couple more months to make use of the service. Allegedly Samsung will also design the app for Windows Phone as well, however there is no clear-cut date provided by when Windows Phone users would get their hands on Samsung Cloud Print. If you're an SMB, do you think Samsung's take on Cloud Printing is worth your dime? Do let us know in the comments below.