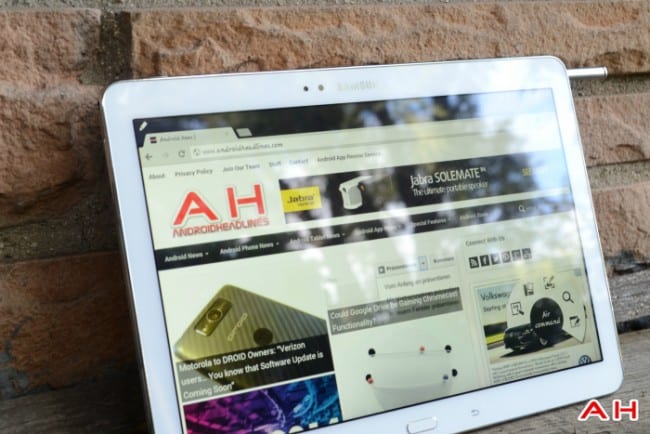 Not to be confused with the rumored Galaxy NotePRO 12.2 coming to Verizon, the Galaxy Note 10.1 2014 Edition has finally made its way over to Verizon. This is the LTE version, obviously, so it's a bit more expensive than the WiFi edition. The Verizon Galaxy Note 10.1 2014 Edition is on sale now. It's going for $599 on contract and off contract a price of $699. So not a huge difference between the 2-year contract and off contract price, I'd go off-contract anyways. You don't want to be stuck in a contract with a tablet.

Compared to the $549 price tag of the WiFi version, the Galaxy Note 10.1 2014 Edition isn't that expensive. Compared to the wifi version, the only things you get on the Verizon edition is the extra logo's and Verizon's 4G LTE service. But while we're talking about logo's at least Verizon has made them smaller than what was on the Verizon Galaxy Note 10.1 last year. That logo was huge.

As far as specs go, we're looking at a 10.1-inch 2560×1600 resolution display, 2MP front facing camera, 8MP camera on the back, 32GB of storage, Qualcomm Snapdragon 800 processor inside, 3GB of RAM and a pretty large battery. This is what we call a flagship tablet. It doesn't really cut any corners at all. Which is nice to see.

Verizon seems to be really stepping up their tablet game. As they've added quite a few tablets lately. It all started with the Google Nexus 7 2013 which they finally approved, then the LG G Pad 8.3 became available and now the Samsung Galaxy Note 10.1 2014 is available. We're also expecting the Samsung Galaxy NotePRO 12.2 to launch on Verizon shortly.

We've got links for both the Verizon and WiFi version of the Samsung Galaxy Note 10.1 2014 Edition down below for those that are interested in picking one up.