Skip to content
Trusted By Millions
Independent, Expert Android News You Can Trust, Since 2010
Publishing More Android Than Anyone Else
11
Today
172
This Week
437
This Month
2379
This Year
112458
All Time Samsung has been diving headfirst into the smart wearables arena ever since launching the Galaxy Gear smartwatch last September, joining Sony as one of the first big companies to launch such a device.  Google meanwhile has been working on a different kind of wearable that many people have surely heard of called Google Glass, which is a display that sits on a pair of glasses and gives you an augmented view of the world.  If you haven’t seen Google Glass in action you should check out the video Google released last year showing off a number of things you can do with Glass and how it looks to the eye.  Meanwhile it seems that Samsung isn’t content with letting just Google battle it out solely in the smart glasses arena, and has been working on their own version of such a device known as Galaxy Glass at this time.  Knowing how well the Gear integrates with Samsung’s other devices it makes sense to see Samsung working on such a project.  Every device has to have something unique to sell itself, and just being a Google Glass competitor likely isn’t enough given the mind share Google Glass has at this point, so it seems that Samsung does indeed have something rather interesting up its sleeve.  While Google Glass relies almost exclusively on voice commands via Google Now to do anything with the device, it seems that Samsung is working on other input methods other than just having a touchpad on the side of the unit as Google does.

Here goes the augmented reality keyboard for such tasks, and appears to easily be able to replace a keyboard for even the most menial of input tasks.  If you’re in a crowded area with lots of noise you can probably guess just how difficult asking your smart glasses to do something would be, and forget responding to any kind of message like that.  Knowing just how these devices work it makes sense to see an augmented reality keyboard being “projected” onto your hands and becoming an input in place of a physical device.  Know that this “projection” is just a digital image on the glass display itself, not an actual projection onto your hands, so while you know you’re typing a message out passersby might just think you’ve got a strange itch you can’t seem to scratch. 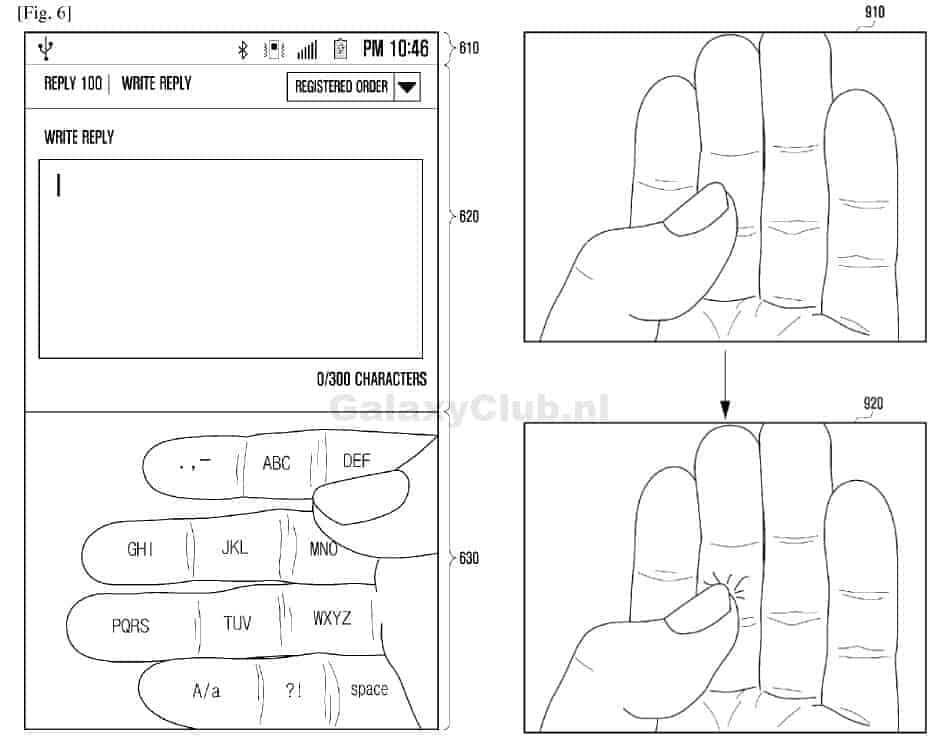 The patent filed here is pretty detailed, and it’s a pretty sweet concept if I do say so myself.  The keyboard can be used in a number of ways, either as a T9-style keyboard being used with one hand much like your old dumb phone used, or as a full-fledged QWERTY keyboard by using both palms held up in an upright fashion.  The patent also covers general navigation using your hands, such as swiping through the interface using your ring finger as a pad and moving your thumb down it to swipe downward.  There’s a lot of really incredible things that can be done with augmented reality and we’re only seeing the surface scratched here.  It’s entirely possible that the Galaxy Note 4 unveiling, presumably scheduled for September, could feature the Galaxy Glass being unveiled as part of Samsung’s Unpacked 5 part 2 event, but there’s really no telling with a project of this size and scope.  Of course last year some of us weren’t exactly expecting Samsung to so quickly jump into the smartwatch game and they proved us wrong, so we’ll just have to wait and see.