Samsung is doing its part to change things up and bring a little innovation to their upcoming devices. We’ve seen plenty of different unlocking methods over the years, the newest being the finger scanner embedded in the iPhone 5s and Samsung’s upcoming Galaxy S 5. In one of Samsung’s newest patents recently filed with the USPTO, it seems that Samsung wants to change the simple unlock method that they have on their devices currently that consists of a simple touch and drag which is the same as virtually every other Android device. The new patent suggests that Samsung is looking implement a new way to wake your device and unlock the display, by utilizing combination touch and gesture setup.

The standard touch and gesture based unlock method for the screen inside Android is set up as a pattern unlock, and LG has their Knock code which basically has you tap the screen in a predetermined sequence to unlock the display on some of their newest devices. Samsung seeks to set their method apart by having users touch at any point on the display, and proceed to implement a gesture with at least one point on the screen that intersects with where you have already swiped your finger. As the patent describes, you would be able to both wake and unlock the screen by using this touch/gesture combo, so hitting the power button before you unlock screens is starting to look like a thing of the past.

Unlocking the screen and waking up your device with this gesture isn’t the only thing it’ll be able to do. The patent lists that you can also set up predefined gestures with one or more intersecting points, and by using those gestures you can not only wake up the display but then unlock into a designated application or shortcut. Much like some unlock screens provide quick access to something like the clock or camera, Samsung’s new unlock method would provide a similar function for seemingly any app you choose. Samsung could truly make this feature a useful one, and its almost a wonder someone didn’t think of it before hand. We saw that they made some other changes to their lock screen recently as well, with the new animation that will be coming out on the Galaxy S 5. 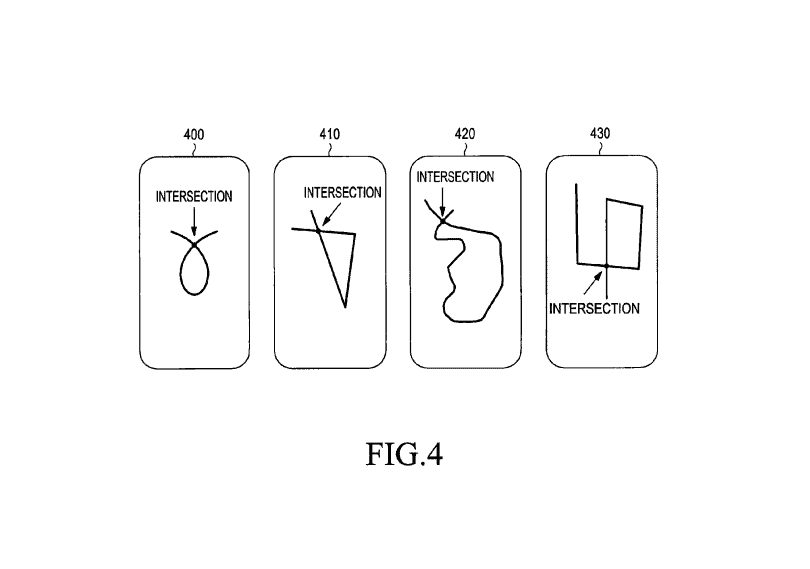