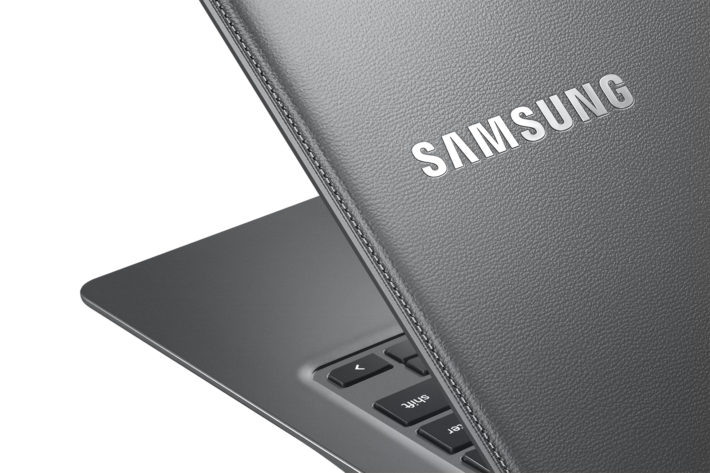 Earlier this month, Samsung made the Chromebook 2 official, finally. It's not much of a change over their last Chromebook, but it does have an Octa-core Exynos CPU inside, as well as a 13.3-inch version which has a full HD display. Samsung has also doubled the available RAM to 4GB, which was desperately needed. Other than that the specs are identical to the original ARM Chromebook from Samsung, which they released in 2012.Samsung stated that the Chromebook 2 would go on sale in April and well that's only a few days away. Today, the official product pages on Samsung's website popped up with the complete specs, which usually means it'll be available pretty soon for purchase.

What's interesting here is that the Chromebook 2 doesn't support WiFi 802.11 ac networks out-of-the-box. Samsung is going to push a software update to add support. Which is kind of strange, you'd think that would be standard on Chromebooks these days, especially since there's no ethernet port on most of them. Some other interesting notes include the weight, which the 11.6-inch Chromebook 2 will be weighing in at about 2.43 pounds and the 13.3-inch version at 2.65 pounds. So not much of a difference between the two, considering the 13.3-inch Chromebook 2 is larger and has many more pixels than the 11.6-inch version. These are some pretty light Chromebooks, which is what makes them so portable, and why we love them so much.

Samsung should have the Chromebook 2 available in just about every retailer you can think of. That includes Best Buy, Amazon, Walmart, Target, and many others. Of course, once we find out who will be carrying them at launch, we'll be sure to let everyone know. The Chromebook 2 is available for $319 and $399 for the 11.6-inch and 13.3-inch models respectively. How many of our readers are anxious to get their hands on the Samsung Chromebook 2 complete with the faux leather backing? Let us know in the comments below.