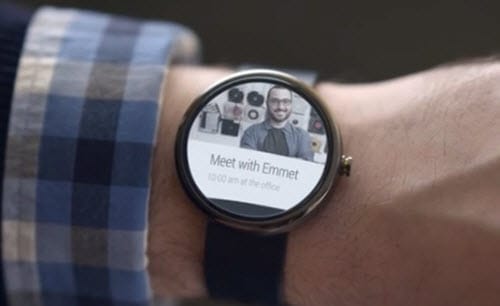 Some exciting news came out today when Google announced Android Wear – the sad thing about is that the general public has probably heard nothing about it and therefore cannot share in my excitement.  It is like taking the Samsung Gear and making it actually useful – style and functionality.  We take our smartphones with us everywhere, every day, but as powerful as these minicomputers have become, we are barely scratching the surface of the mobile technology – that is where the wearables come into play.

We all knew that Google would eventually join the wearable smartwatch craze, especially since they lead the pack with another wearable – Google Glass.  What we did not know was that Google's entry into the wearable smartwatch category had more emphasis on the 'wearable' part and none on the smartwatch part…Google's Android Wear is an extension of Android designed specifically for wearable devices.  The Developer Kit is already available and several companies – Motorola, LG, HTC, Samsung, and other more traditional watchmakers, such as Fossil – have been working with Google and expect to have their wearable smartwatches out in 2014.

As Samsung was getting ready to announce their Galaxy Gear – since changed to simply, Gear for the updated model – we did an article last year on qualities that a smartwatch needed to have in order to be popular and useful.  While one could argue if the Gear was stylish or not, the Gear as a whole was a failure in most categories.  We think the Android Wear devices can change all of that and put a wearable smartwatch on many more people.

Style – has to be a priority. Yes, it is superficial, it isn't important to the devices function. Does it have to be pretty to be of use to an individual – NO.  However, a watch is a fashion statement – a piece of jewelry if you would, and while it may not add to the device's functionality, it adds a great deal to its appeal and ability to sell…after all, if you cannot sell the smartwatch, you cannot make any money on the device no matter how wonderful it is.  We are a 'pretty' society and without fashion and looks, we have nothing. The examples in the videos are nothing less than stunning to look at as well as interesting.

Simplicity – as much as we are a 'pretty' society, most young people have the attention span of a gnat and most older people cannot be bothered if it is too complicated to use. If the functions can work by simply saying, "OK Google," and then a short command, most people can handle that as long as it works properly. So far, the videos show a very useful and easy to use device.

Notification Management – What good is getting a notification on your wrist that forces you to pull out your smartphone to finish the simple act of a notification. Have a useful notification pop-up that only requires the use of your smartwatch. Google has an excellent notification system and from the looks of things they have integrated that very nicely into Android Wear. With that in mind comes the next VERY important need:

Easy Input – once you receive your notification, it needs to be easy to respond with your input. Nobody wants to tap a message on a small screen or keypad with a finger or any other device – but speaking, we can all do that easily enough. To answer an incoming text, just say 'reply' and then speak your answer and off it is sent…Fast and at a glance. What is the local weather – up pops the weather for your area. Find a restaurant – up pops local eateries.

Sensors – for those of you that still care about your health, Google will provide a "wide range of sensors" for Apps to utilize – certainly a heart rate monitor and accelerometers and probably a gyroscope of some sort.  Google is working on APIs for smartphone developers that could also be used in the Android Wear.

Google Now – the one thing that can differentiate an Android Wear device from the rest of the pack. Colorful and usefully designed notifications and answers when using Google Now. From what we have seen, Android Wear relies heavily on Google Now, and with the latest refinements and Android 4.4 KitKat, it has finally become a very useful tool on our smartphones – I have seen someone who never had a smartphone, still used a flip phone, and had no desire to get one. That all changed when he got married and had to add his bride's smartphone on his plan and she laid down the law – you will get a smartphone. I suggested he get a Moto X and he cannot put it down – he loves Google Now and without that feature he would still be complaining. A simple, yet powerful and useful tool made a lover out of a hater – and this is why I think Android Wear will be the "Next Big Thing."