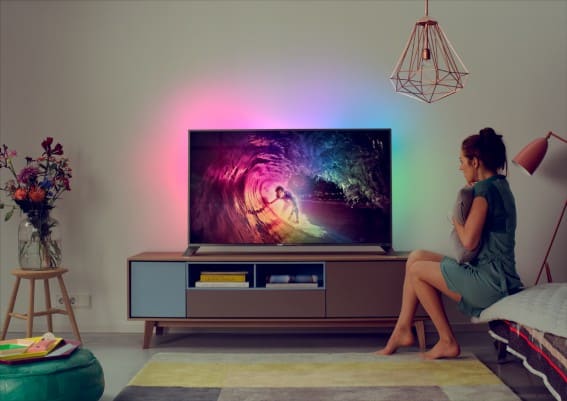 Android on a giant Ultra HD 4K display sounds pretty awesome, doesn't it? Well the good news is, it's about to become a reality for those willing to cough up a presumably large chunk of change, thanks to Philips' recently announced 8000 series of smart TVs.

The Full-HD (1080p) 8100 and 8200 Philips TVs and the Ultra HD (4k) 8800 series are Android-powered, which opens up a world of opportunities for enhancing both the TV and the gaming experience. Users will have access to Philips Smart TV apps, as well as the Google Play Store. This means you can choose from a full range of apps, like Chrome Browser, Google Play Music, YouTube, Netflix, Facebook, Twitter, and everything else the Play Store has to offer. The possibilities are rather overwhelming.

The 8100 and 8200 series, with 800 Hz Perfect Motion Rate plus Super Resolution, are powered by a quad-core processor and the 8800, with 1000 Hz Perfect Motion Rate Ultra plus Ultra Resolution, is actually rocking a hex-core processor, so there's more than enough computing power to provide a highly responsive, rich and immersive experience for even the most hardcore gamers out there. The 8100 and 8200 series are rumored to be 48- and 55-inch, while the 8800 series will be 55-inch only.

The "premium" 8800 series offers distance adaptive sharpness — a pretty nifty feature that uses the TV's built-in camera to automatically detect the viewer and adapt the sharpness accordingly. They also boast an impressive list of control methods, putting an emphasis on just how smart these Smart TVs really are. Users can point, use cursor navigation, type, talk, or make gestures to control the set.

Also included with the 8800 series is a 4-sided Ambilight with the newly integrated Ambilight gaming mode, which is said to dramatically improve the fast-moving scenes in sports and action games. It really looks like Philips' is taking strides to appeal to the gaming community here, which should make a lot of folks out there excited. Count me in with that crowd.

The bad news (at least for some): you'll have to live in Europe or Russia if you want to purchase one when they become available in Q2 2014. Sorry, rest of the world, but there's no word on if/when we'll see them elsewhere. No pricing information was given in the press release.

Anybody else drooling over these right now? If so, try not to get drool on your keyboard as you watch the below video.