In the past couple of years, smartphones have seen a revolution in display technologies and screen sizes. However, one aspect – which is the pet peeve of most smartphone users – has remained more or less untouched – that aspect is battery life. Most smartphone users complain about the horrible battery life they get out of their smartphones and tablets. In most cases, a trade-off occurs between the power and performance of a device, versus its battery life. However, in the near future we can expect a revolution in battery technology to occur, especially if the news coming in from Japan is accurate.

Researchers from the Faculty of Engineering at the University of Tokyo have partnered with those of the University of Kyoto and Japan’s National Institute for Material Science. This group has recently revealed their findings pertaining to a new kind of electrolyte which can be used to increase the efficiency of a Lithium-ion (Li-ion) cell. For a little background, in the case of any typical battery – a positive and a negative electrode are submerged in an electrolyte and the whole set up is encased in a non-conducive case. The most common type of battery used in most smartphone and tablet devices is a form of the Li-ion battery.  Li-ion batteries are a class of rechargeable batteries which get their name from the Li-ions which migrate from the negative electrode to the positive electrode during discharging and reverse their movement during charging. 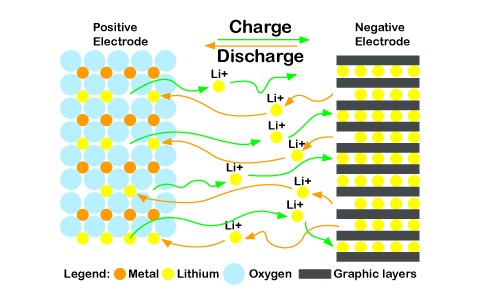 The Japanese researchers have identified a new compound for the electrolyte which is both, highly reactive as well as possesses a high resistance to degradation. In most commercial Li-ion batteries, a concentrated solvent is used in the electrolyte – mostly ethylene carbonate containing complexes of Lithium ions – however if the concentration of the electrolyte increases, there is a marked degradation in battery performance as reactivity goes down. The new electrolyte solvent is unique in the fact that it is almost four times as concentrated as ethylene carbonate, but also provides a higher reactivity performance. These qualities of the new solvent have the potential to enhance existing Li-ion battery performance in terms of increasing charging speeds as well as providing more electric power. The researchers claim that the charging time would decrease to a third while the output voltage would increase from the existing 3V up to 5V.

Though this news in itself is exciting, there is no indication as to when this technology would improve battery performance for our devices. But any progress is good news. Let’s hope the time arrives soon when our average smartphone would require a chance once a month. Wishful thinking much?