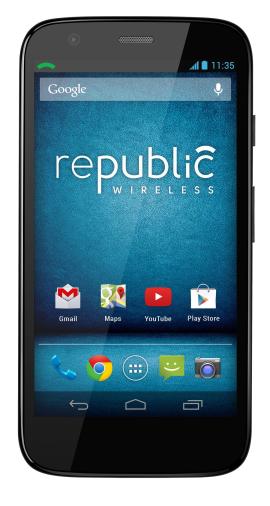 Republic Wireless has been making waves lately. They are kind of like a hybrid carrier. Where it forces you to use WiFi. Republic Wireless will do all phone calls, texts, and data over WiFi, and if you are not within a WiFi area it will use Sprint's or another network's towers to work. So that it's virtually unlimited everything, but it's making you use WiFi a lot more. And there's no way around that.

Last fall, Republic Wireless put the Moto X on their network for just $299, which is what many of us thought the Moto X should have been priced at. Now they are launching the Moto G. The 8GB version is going for $149, and the 16GB for $179. These are going to replace the entry-level Motorola Defy XT which was on Republic Wireless. The Moto G has a 4.5-inch 720p LCD display, Qualcomm Snapdragon 400 quad-core processor, 1GB of RAM, 8GB or 16GB of storage, and a 2050mAh battery inside. Which it provides amazing battery life, I have a Moto G from Aio right  now and it lasts about 3 days before needing to be recharged. The Moto G will be shipping with Android 4.3, but an update to Android 4.4.2 should be coming to the device very quickly as it's already available for other variants.

It's important to note that the Moto G will only work on 3G networks, no 4G LTE. But that shouldn't be a huge deal if you're on Republic Wireless anyways. The carrier is selling the Moto G starting next month, in both the 8GB and 16GB models. Although there is no date just yet. We'll be sure to keep everyone posted on that though. For those that are interested in the unlocked GSM Moto G's, you can find the one you want here.

How many of you are tempted to pick up a Moto G on Republic Wireless?Let us know in the comments below.