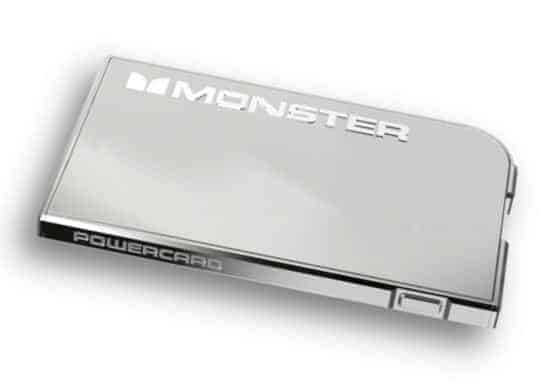 Good news for Monster fans, and those of you that have obscene amounts of money to blow and need something shiny and new and exclusive. If you happen to to enjoy the shopping experience of Harrods and are sitting at your computer ready to buy, you can now apparently order some new luxury goods made by Monster, who specializes in audio headphones with high quality sound. What's the deal? Why are these luxury items so special? First of all they're part of the powercard battery chargers for smartphones. So they instantly become somewhat useful to anyone who needs a boost to their battery from time to time. The catch is that these babies will run you about £1,200 and £1,300, because each powercard charger is either made up of 24k gold  or platinum. In fact, there are only 10 in existence, with five being 24k gold and the other 5 being platinum.

That's right, these are so exclusive that only 10 lucky people will have access to these, although we don't know that the money is worth what you're actually getting when it comes to functionality. Sure, they're plated in Gold and Platinum, and they scream complete baller status, but each powercard only has about 1,650 mAh of juice that it can give you. So, basically it'll end up lasting you half, or 1/3 of a charge. If you're going  for chic, snatch these up before they're gone, if you want something that will provide more usefulness, hit up a limefuel charger pack for $99 that will give 18,000 mAh of power to sustain your device 5 times over.

In addition to the new extremely limited Powercard chargers, Monster has also released a new luxury pair of headphones, called the DiamondZ, that are plated in rose gold. These aren't quite as expensive as the Powercards, but they will still run you £249.95 a pair. That's $415, and an average pair of Monster headphones can run you about $200-$300 for a high quality set. Got the money to burn and going to be near the London Harrods location anytime between now and April 11th? Than any of this ridiculously price swag can be yours.