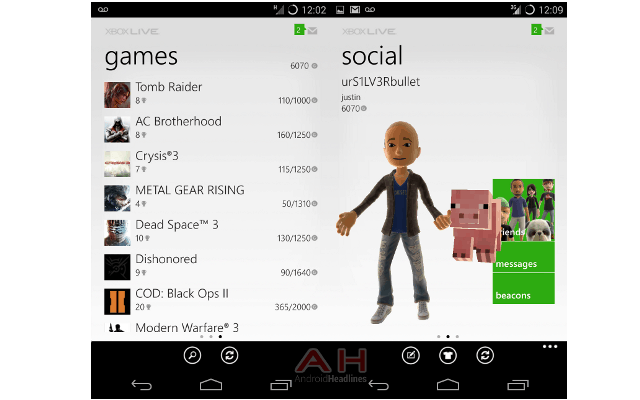 While Google Play Games is coming into its own, there are plenty of Xbox users out there on Android devices that probably wouldn't mind having social gaming features baked right into the Xbox Live app for android itself. Currently Microsoft's Xbox Live for Android app doesn't support any sort of social gaming aspects like it does on Windows phone, and users might find that feature handy for discovering which of their Xbox live friends also play games on mobile devices. This could serve as a great way to play games with your Xbox Live friends on the go as well as at home, and would add a third major social gaming platform into the mobile mix, with the other two being Google Play Games of course, and Apple's social gaming platform called Game Center with similar features.

The Verge points out that a new job listing had popped up on Microsoft's careers page, which shows that they're hiring for a software engineer to help in building an "extensible and scalable" cross platform experience. This sounds like Microsoft is looking to take those already available aspects of Xbox Live on Windows Phone, to other platforms so things work a bit more seamlessly. While it's still too early to tell what Microsoft's endgame is here with this change-up to the app, some likely features that could come along down the line would be similar to how Google Play Games works now in letting you see friends who are online and what they're playing, and give you the opportunity to discover new online games, and invite friends or family into multiplayer games for a challenge.

One of the goals here for Microsoft is to take back some of the developers they may have lost out on to other platforms, and make it a simpler task to get Xbox Live integrated into apps and games. Just think, if you're favorite games like Riptide GP 2, Asphalt 8 or others were integrated with Xbox Live you would have a whole world of possibilities when it comes social gaming. It's still unclear when this update should come through for the app on Android, but it likely won't be for quite a little while as the job listing was just posted.