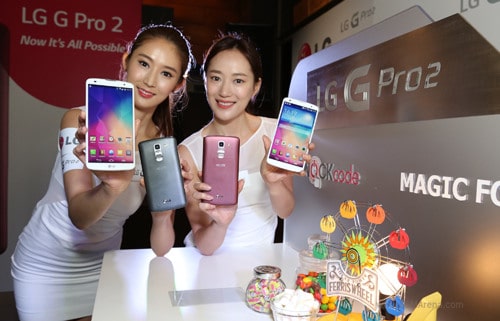 Well this is good news for LG. Since they announced their successor to the Optimus G Pro, the G Pro 2 just ahead of Mobile World Congress, they’ve been selling the device over in their homeland of South Korea. According to a LG representative who was speaking with a Korean newspaper, it appears that the LG G Pro 2 is outselling the LG G2. Even though it’s selling for KRW999,000, which is equal to about $927 USD. That’s pretty crazy that it’s outselling the LG G2, but then again it is a newer phone, and it’s obvious that the Koreans love their big phones. Just look at how well the Optimus Vu and the Galaxy Note series of phones from their homeland manufacturers have done over there.

There’s also word that the price of the LG G Pro 2 is going to be dropping. Which is likely because of the price of the Samsung Galaxy S5, which is priced at KRW800,000, or about $742 USD. So it’d be a fair guess to see the G Pro 2 drop to around that price tag.

So far the LG G Pro 2  hasn’t made it outside of South Korea just yet. We haven’t even heard of plans to bring it outside of South Korea, but LG did state that more information would become available in April, so hopefully we’ll learn in a couple of weeks where LG plans to bring the G Pro 2. I’m pretty confident that it’ll come to the US and probably be on all four carriers – that’s Verizon, Sprint, AT&T and T-Mobile – since the G2 was available on all four, and that did quite well. But we have no official word just yet, so that’s all speculation still.

The LG G Pro 2 is a great phablet from LG, sure it doesn’t have the stylus, but not everyone wants a stylus. A lot of people just want the bigger phone with the bigger battery. Of course this does have some other features that make the screen size much easier to handle. How many of you are interested in the LG G Pro 2?