As it turns out, the few leaks with information that we saw pointing to an android 4.4.3 update being on the way, were apparently real pieces of information. While they didn’t hold any real detail about the upcoming software update, they did let us in on the fact that 4.4.3 was apparently in the works. At the time we were only able to speculate that this change would be heading our way soon. As we’re learning today, android 4.4.3 is in fact on the way it seems and we have some details to come along with that statement, along with a screenshot that was passed along to Android Police, displaying the build running on a Nexus 5. This new software update, whenever it begins to push out to devices, is said to be pretty much all about bug fixes and improvements. Not improvements in the way of changes or new features, but improving the experience for us users by fixing things that need fixin’.

So, with that said, we can go in to what little details we do have and share that information with you. While some of you may be sad to hear that this next version of android won’t have anything to do with new features, whatever Google has planned for the next major android release is likely to far off to warrant implementing things now. However, there are always things that could be improved with the way the software works or performs, so Google is apparently setting out to provide some of that to us so that things work better. Most of the information we have gotten a hold of about the bug fixes to come in 4.4.3 is listed in a basic summary, so actual in depth detail will likely come down the road.

Not all the fixes listed here will mean much to everyone, and some won’t even be affected because the fixes aren’t addressed at every single person on 4.4.2, only those who have the issue that warranted the fix. To start, we can see that there is a fix for the camera focus, which we’re sure that plenty of people will be happy about. There are also multiple Bluetooth fixes, a fix for random reboots, subtitle fixes, a missed call LED fix, an FCC compliance fix, internet telephony fix, data usage graph fix, WiFi auto-connect fix, USB debugging security fix, app shortcuts security fix, power manager display wakelock fix, a fix for frequent data connection dropouts, mm-qcamera-daemon crash and optimization fixes, a fix to address the occasional removal of app shortcuts after updates, a fix to address some users being stuck in the activation screen, some other camera fixes, and MMS, Email/Exchange, Calendar, People/Dialer/Contacts, DSP, IPv6, VPN fixes. Whew, that’s quite the list, but some of them definitely sound like they will be needed. As soon as more details come up about specifics to these fixes, we’ll be sure to post them up and let everyone know. 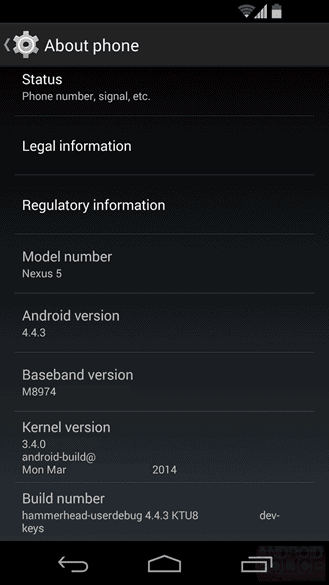